Home Ghana News Saint of the day: Our Lady Of Mount Carmel 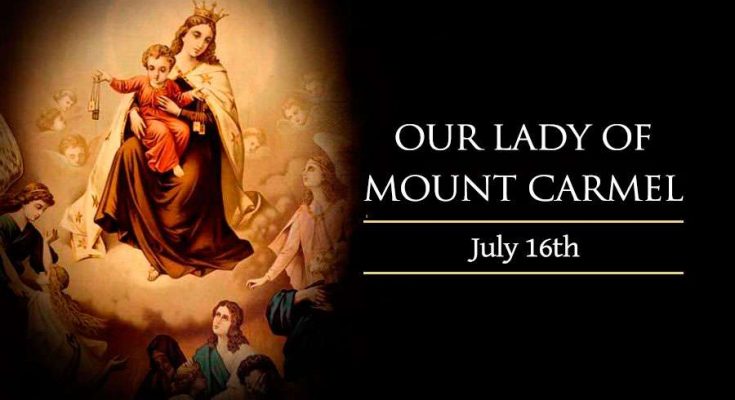 Saint of the day: Our Lady Of Mount Carmel

Our Lady of Mount Carmel is the title given to the Blessed Virgin Mary in Her role as patroness of the Carmelite Order. The first Carmelites were Christian hermits living on Mount Carmel in the Holy Land during the late 12th century to mid 13th century. They built in the midst of their hermitages a chapel which they dedicated to the Blessed Virgin, also termed as the “Lady of the place”.

The Carmelite Order was the only religious order to be started in the Crusader States. In the 13th century, some of its people migrated west to England, setting up a chapter there from 1241–1242. A tradition first attested to in the late 14th century says that Saint Simon Stock, believed to be an early English prior general of the Carmelite Order soon after its migration to England, had a vision of the Blessed Virgin Mary in which she gave him the Brown Scapular. This became part of the Carmelite habit from 1287.

In Simon Stock’s vision, Mary promised that those who died wearing the scapular would be saved. This is a devotional sacramental signifying the wearer’s consecration to Mary and affiliation with the Carmelite order. It symbolizes her special protection and calls the wearers to consecrate themselves to her in a special way. It does not mean you have to become a priest or a nun. You can be married or single as well.

Simon Stock’s vision was long embraced by many promoters of the scapular devotion. The liturgical feast of Our Lady of Mount Carmel did not originally have a specific association with the Brown Scapular or the tradition of Stock’s vision of the Blessed Virgin Mary. This tradition grew gradually, as did the liturgical cult of St. Simon. The latter has been documented in Bordeaux, where Stock died, from the year 1435 in Ireland and England from 1458 and in the rest of the Order, from 1564. Although Simon Stock was never officially canonized, his feast day is celebrated in the church.

The Carmelite convent of Aylesford, England, which was damaged was later restored and a relic of Saint Simon Stock was placed there in 1951. The saint’s feast is celebrated in the places dedicated to him.

Happy feast day to all Simon and all Carmelites. Our Lady of Mount Carmel, pray for us. Amen