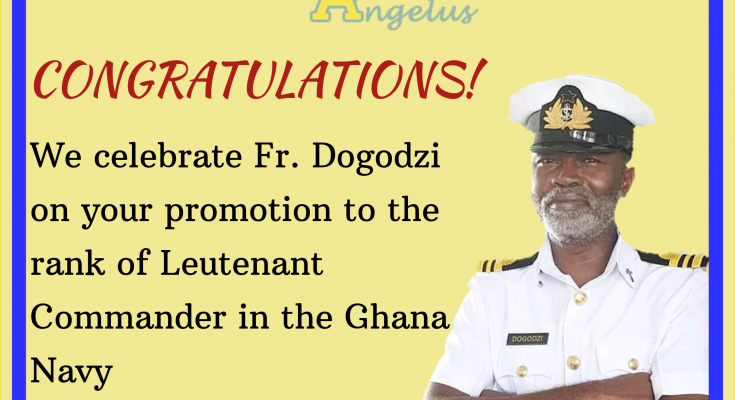 The Catholic Community in Ghana, especially the Catholic Archdiocese of Accra, took to social media to celebrate Rev. Fr. Lt. Cdr. Sylvanus Dogodzi, on the dawn of September 2, his birth date as well as the day of his elevation to the rank of Lieutenant Commander in the Ghana Navy, of the Ghana Armed Forces (equivalent to Major in the Army).

Here is his profile as a Military man and a Catholic Priest.

A brief look at his military training

Together with his colleagues, they were commissioned on Friday 2nd September 2011 the day of his birth. After the commission, he went to Sekondi Naval Base to continue with the Sea phase of the training for 6 months where he was educated on all the navy terms. This was necessary to get accustomed to all the customs and traditions since the navy jargon is different from the other military services. After the 6 months of training, he went to the sea to have a real feel of what was taught. Fr. Sylvanus was then posted to Sekondi Naval base as a Chaplain and was there for almost three years.

In 2013, after three years of service, the then Archbishop of Accra Most Rev. Gabriel Charles Palmer-Buckle sent him to Rome for a meeting organised by the Dicastery for Integral Human Development under the auspices of the Stella Marris Apostleship of the Sea. From that meeting in Rome, he prepared and went to Liberia for his first peacekeeping operation for six months. When he returned from Liberia, he was sent to Accra to work at the Eastern Naval Base and St. Catherine Catholic Church, Burma Camp.

Whiles in Accra he undertook a Master’s programme in Conflict, Peace, and Security at the Kofi Annan Peace Keeping Center (KAIPTC). After the completion of the training programme, he was promoted to the rank of Naval Lieutenant that is comparable to the rank of a Captain in the Army and flight Lieutenant in the Airforce.

After the promotion, he served at the Eastern Command as the Naval Chaplain to the year 2017. He wrote his promotional exams in 2017 and was successful.

Unfortunately, in 2018, he had to undergo three neck surgeries but God was faithful in all these surgeries. After recovery from the surgery, he had to come back to Tema to start his work.

He is currently at the Eastern Naval Command as the Command Chaplain and the Director of the Apostleship of the Sea, Stella Marris Ghana, an International Catholic Organization that takes care of fisher folks and seafarers, with his residence at the St. Joseph the Worker Catholic Church, Tema Community 8.

As a Naval Chaplain, he organizes quarterly inter-denominational religious programmes for the troops. There are prayer and discussion sessions every Wednesday (known as Padre Hour) for the troops. He is also the Command Counsellor where he with a team of counselors counsel troops with issues with Post Traumatic Stress Disorder (PTSD), troops who are addicted, troops who sometimes absent from duty without permission. He together with the team engaged them in a lot of counseling to bring them back to track or help them conform to the rules and regulations of the service.

Life as a priest

Rev Fr. Lt. Cdr. Sylvanus Dogodzi was ordained as a Catholic priest on 21st January 2006 by Most Rev. Gabriel Charles Palmer-Buckle. He was the first priest to be ordained by the Archbishop when he was transferred from Koforidua Diocese to Accra Archdiocese.

Before His ordination, he took some time out of formation for two years. During that time, he taught at the Christ the King School at Cantonments in Accra. He was posted to the Holy Spirit Cathedral Adabraka as an assistant priest.

Whilst at the cathedral, he pursued his first degree in psychology and political science at the University Of Ghana, Legon and he graduated in 2011.

After working for 3 years at the Cathedral, he was sent to Our Lady of Mercy Catholic Church (OLAM) Tema Community 1, as an associate priest and also the chaplain for Apostleship of the Sea. While working in Our Lady of Mercy Parish (OLAM), he started his processes of getting enlisted into the Ghana Armed Forces.

After his fifth year at OLAM, he went to the Military Academy for his Military training. In Takoradi, he was at St. Paul Pro-Cathedral in Sekondi. Over there, he used the opportunity to learn the Fante language and was able to celebrate Mass and preach in the Twi language. He has been a priest for almost 15 years now.

As one of the eight children, Rev Fr. Lt. Cdr. Sylvanus Dogodzi was born on the 2nd of September 1976 in Kumasi to Mrs. Lydia Dogodzi who is an Octogenarian now and SWO 2 Amos Kwame Dogodzi of blessed Memory

He attended Airport Police Prim & JSS. After completion with his Basic Education, he got admission to Pope John Secondary School and Minor Seminary, Effiduase-Koforidua in 1993 for his secondary education, where he completed in 1995. 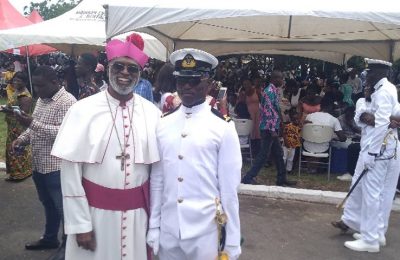