Home World News Reception of holy communion on tongue to continue in Portland Archdiocese amidst wild spread of Coronavirus. 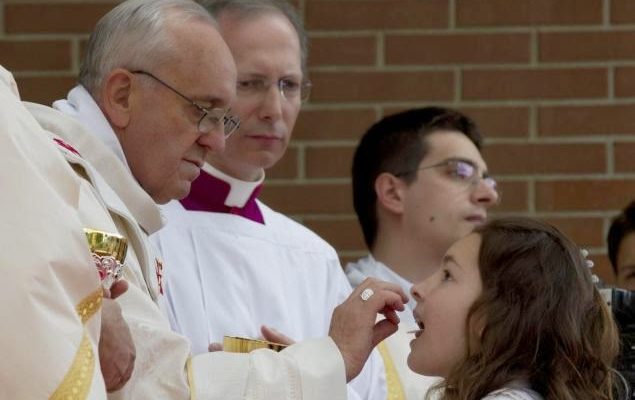 Reception of holy communion on tongue to continue in Portland Archdiocese amidst wild spread of Coronavirus.

The Archdiocese of Portland in Oregon on Monday affirmed its stance on the right to receive Holy Communion on the tongue defying the risk of transmitting the coronavirus infection.

This follows the Archdiocese’s further checks with stakeholders to reaffirm their stance on the reception of holy communion on the tongue.

The office said “We consulted with two physicians regarding this issue, one of which is a specialist in immunology for the State of Oregon. They agreed that when done properly the reception of Holy Communion on the tongue or in the hand poses a more or less equal risk”.

The outfit also revealed that further consultation says “the risk of touching the tongue and passing the saliva on to others is obviously a danger, however, the chance of touching someone’s hand is equally probable and one’s hands have greater exposure to germs.”

They explain that the  statement follows complaints from some parishioners who indicated that they had been denied Holy Communion on the tongue, or told that reception on the tongue “has been banned in certain parishes.”

The directive also says “if Extraordinary Ministers of Holy Communion feel uncomfortable distributing Holy Communion either in the hand or on the tongue they should be excused from this ministry.”

Prelates in Ghana among others have also issued a directive that calls on the faithful to refrain from receiving holy communion on the tongue as part of measures to trim down a possible severity of the outbreak.

The new strain of coronavirus causes respiratory disease, COVID-19, and has a fatality rate of roughly 3%. There have been more than 93,000 confirmed cases of coronavirus in 81 countries, and nearly 3,200 deaths, as of March 4. The vast majority of cases and deaths have been in China.