Home Ghana News Pope to Biden: foster peace and reconciliation in the US and the world 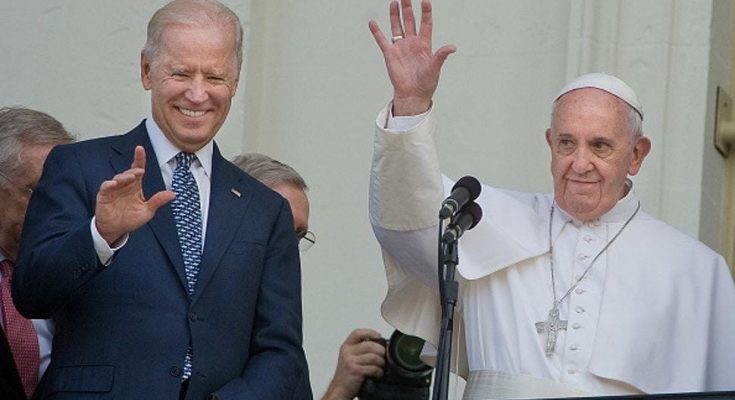 Pope Francis opened his message to US President Joe Biden saying, “On the occasion of your inauguration as the fourty-sixth President of the United States of America, I extend cordial good wishes and the assurance of my prayers that Almighty God will grant you wisdom and strength in the exercise of your high office”.

On Wednesday, at around noon Eastern time, Democrats Joseph R Biden and Kamala Harris took their oaths and were sworn in as 46th president and vice-president respectively. Biden’s inauguration comes at a time of intense division in the countr.y Just two weeks ago, on 6 January, as Congress was certifying the results of the presidential election, supporters of President Donald Trump stormed the Capitol Building in Washington D.C., occupying the building for several hours. Pope Francis denounced this violent act during his Sunday Angelus on 10 January.

In the wake of the attack on the Capitol, which led to five deaths, the House of Representatives impeached Donald Trump on a charge of ‘incitement of insurrection.’ Although no longer president, the possibility of a Senate trial on the charge could yet take place, despite the fact that Trump is no longer president.

In his message to President Biden on Wednesday, Pope Francis expresses his hope that “under your leadership, may the American people continue to draw strength from the lofty political, ethical and religious values that have inspired the nation since its founding”. The United States celebrates 244 years of democracy since its founding in 1776.

President Joe Biden has taken office as the country continues to battle one of the biggest coronavirus crises worldwide. Encouraging Americans to follow online, the 59th inauguration programme includes a memorial for those who have died during this pandemic – and recognition will be shown to those who have shown love and resilience towards those in need.

So far, 402 thousand people have died from Covid-19 in the United States – where over 24 million confirmed cases have been reported.

“At a time when the grave crises facing our human family call for farsighted and united responses,” Pope Francis writes in his message, “I pray that your decisions will be guided by a concern for building a society marked by authentic justice and freedom, together with unfailing respect for the rights and dignity of every person, especially the poor, the vulnerable and those who have no voice.”

Concluding his message, Pope Francis writes, “I likewise ask God, the source of all wisdom and truth, to guide your efforts to foster understanding, reconciliation and peace within the United States and among the nations of the world in order to advance the universal common good. With these sentiments, I willingly invoke upon you and your family and the beloved American people an abundance of blessings.”