Home International Pope Francis to youth in Greece: Don’t be ‘prisoners of the cell phone’ 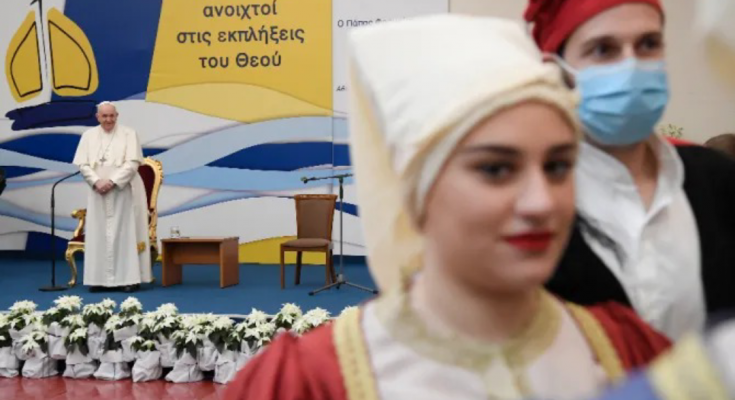 Pope Francis urged young people in Athens on Monday not to be “prisoners of the cell phone,” but to truly share their lives with others. Speaking in a school sports hall in a suburb of the Greek capital on Dec. 6, the pope said that helping others was “the way to bring about something truly new in history.” 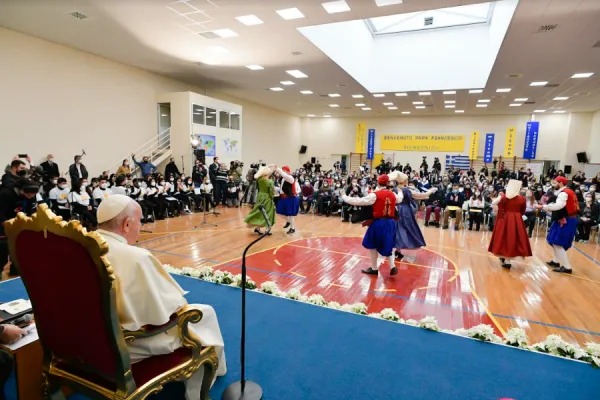 “Many people today are constantly using social media, but are not themselves very social: they are caught up in themselves, prisoners of the cell phone in their hand,” he said, in his last address before departing for Rome at the end of a three-day visit to Greece.

“What appears on the screen is not the reality of other persons: their eyes, their breath, and their hands. The screen can easily become a mirror, where you think you are looking at the world, but in reality, you are all alone before a virtual world full of appearances, of photos dressed up to look always beautiful and acceptable.”

“Yet how beautiful it is simply to be together with other people, to discover the newness of others! Cultivate the mystique of togetherness, the joy of sharing, the enthusiasm of serving!”

The pope arrived in Greece on Dec. 3 after a two-day visit to Cyprus, an island in the eastern Mediterranean Sea. In a packed itinerary, he met Cypriot authorities, Orthodox bishops, local Catholics, and migrants, as well as celebrating Mass in the country’s largest stadium.

The 84-year-old pope’s three days in neighboring Greece included meetings with political authorities, Orthodox leaders, the Catholic community, local Jesuits, and migrants on the island of Lesbos. He also celebrated Mass at a concert hall in the capital. Greece, officially known as the Hellenic Republic, is a predominantly Orthodox country of 10.7 million people, around 50,000 of whom are Catholic. Seating on a dais at the end of a basketball court, the pope listened to the testimonies of three young people: Katerina Binibini, a young Filipina; Ioanna Vidali, from Tinos, a Greek island in the Aegean Sea; and Aboud Gabro, from Syria. 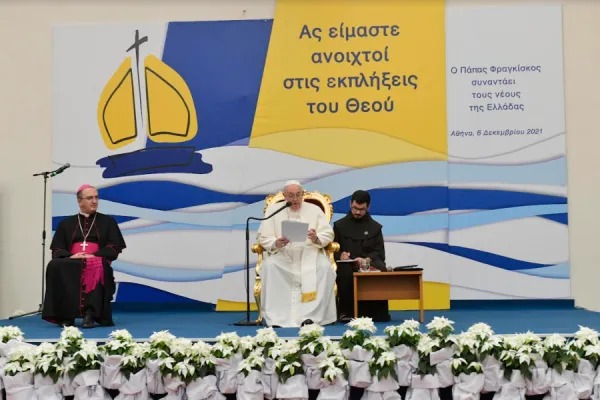 Katerina Binibini said that she struggled with doubt when confronted with people’s suffering. “I have also had moments of anger and jealousy at seeing people who are not believers and who seem to have no pain or problems, while I, as a faithful Christian, feel constantly challenged,” she said. “Many times I think how unjust God is.” But she said that the pandemic had helped her to accept setbacks and face life in a new way. “I realized that in difficult times we are all equal and that we must convert our individualistic mentality to help others,” she said at the live-streamed event. Ioanna Vidali, 26, spoke of how she strayed from her childhood faith while studying for university entrance exams. But her life changed after she saw “a Christ-like figure” in a dream.

“Since then, not only has my faith been strengthened, but I have also embraced the greatness of God’s love,” she said, adding that she now tried to share her faith by working with other young people. 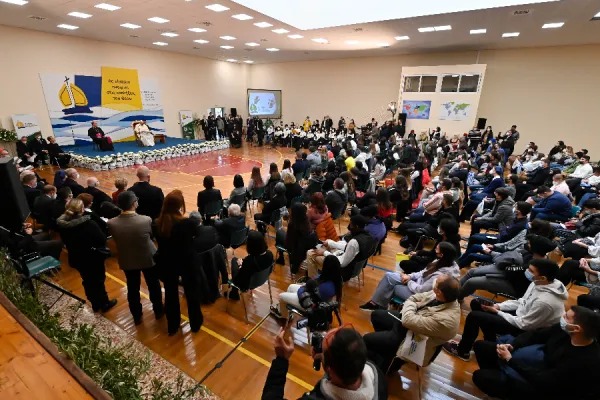 Aboud Gabro, 18, described his family’s dramatic escape by boat from the war-torn city of Aleppo to Greece. He recalled what he said was the miraculous preservation of their lives when a device exploded when they were outside on their balcony. Later, a bomb struck his parents’ bedroom when they were inside, but they survived.

“After three attempts, we managed to land on the coast of hope. It was difficult to stay on a rock with no water and no food, waiting for dawn and for a coast guard ship to come and rescue us,” he said.

“We were full of joy when we arrived in Symi and then in Rhodes, where the inhabitants welcomed us with open arms, understanding our difficulties.”

Picking up on Katerina’s admission of doubt, he said that Catholics should not be afraid of their uncertainties.

“On the contrary, doubts are ‘vitamins of faith’: they help strengthen faith and make it more robust. They enable faith to become more conscious, free, and mature,” he said.

But he warned young people against the temptation to despair when overwhelmed by their problems. “That, my friends, is a temptation! A temptation to be rejected. The devil sows this doubt in our hearts in order to make us sad,” he said. The way to overcome this temptation, he said, is to cultivate a daily sense of wonder. He asked: “Do you know the starting point for all philosophy, but also for art, culture, and science? Do you know what it is? All that began with a spark, a realization, captured in the magnificent word: thaumàzein. It began with wonder, with amazement.”

He said that the same was true of faith.

“In the deepest sense, faith is not an idea or a system of morality, but a reality, a beautiful truth that does not depend on us and that leaves us amazed: we are God’s beloved children,” he said.

The pope stressed that God continued to love young people no matter what they think or do.

“If we stand before a mirror, we may not see ourselves the way we would like, because we are too concerned with the things we don’t like. But if we stand before God, the perspective changes,” he said.

“We cannot help but be amazed that, for all our sins and failings, for him, we are, and always will be, his beloved children.”

“So, instead of starting the day by looking in the mirror, why not open your bedroom window and focus on the beauty that you see all around you? Step outside yourself.”

The pope spoke about the Sirens, the Greek mythological creatures that lured sailors to their deaths by the beauty of their songs. He recalled that Odysseus resisted their allure by asking to be tied to his ship’s mast.

“Another ancient figure, Orpheus, teaches us a better way,” the pope said. “He sang a more beautiful melody than that of the sirens, and thus reduced them to silence. That is why it is important to cherish the wonder, the amazement, the beauty of faith!”

“We are Christians not out of duty, but out of beauty. And precisely because we want to cherish that beauty, we have to say no to anything that would mar it.”

The pope praised Ioanna for talking about the importance of other people.

“Helping others is not for losers, but for winners; it is the way to bring about something truly new in history,” he said.

“I am told that in Greek, the same word can mean ‘new’ and ‘young.’ Service is the newness of Jesus; service, dedication to others, is the newness that makes life ever youthful.”

“Don’t be satisfied with publishing a few posts or tweets. Don’t settle for virtual encounters, look for real ones, especially with those who need you: don’t look for visibility, but for the invisible. This is original, revolutionary.”

The pope described Aboud’s journey from Syria to Greece as “a true modern-day odyssey.”

“As for you,” he told the young people, “nourish the courage of hope. The kind of hope that you had, Aboud. How do you do this? By your choices, your decisions.” 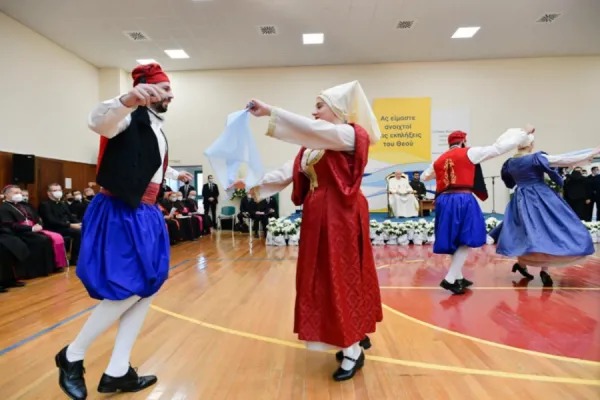 “Choosing is a challenge. It involves facing the fear of the unknown, emerging from the chaos of uniformity, deciding to take your life in hand.”

“To make right choices, you should remember one thing: good decisions are always about others, not just about ourselves. Those are the decisions that are worth making, the dreams worth striving to accomplish, those that require courage and involve others.”