Pope Francis said Sunday that the Christian life requires concrete commitments and spiritual combat in order to grow in holiness.

“There is no path to holiness without some renunciation and without spiritual combat,” Pope Francis said in his Angelus address Sept. 27.

This battle for personal sanctity requires grace “to fight for the good, to fight not to fall into temptation, to do what we can on our part, to come to live in the peace and joy of the Beatitudes,” the pope added.

In the Catholic tradition, spiritual combat involves an internal “battle of prayer” in which a Christian must fight temptation, distraction, discouragement, or dryness. Spiritual combat also entails cultivating virtues to make better life choices and exercise charity towards one’s neighbor.

The pope acknowledged that conversion can be a painful process because it is a process of moral purification, which he likened to removing encrustations from one’s heart.

Reflecting on Sunday’s Gospel, the pope said that “living a Christian life is not made up of dreams or beautiful aspirations, but of concrete commitments, in order to open ourselves ever more to God’s will and to love for our brothers and sisters.”

The pope pointed to one of Jesus’ parables in chapter 21 in the Gospel of Matthew in which a father asks two sons to go and work in his vineyard.

“To the father’s invitation to go and work in the vineyard, the first son impulsively responds ‘no, no I will not go,’ but then he repents and goes; instead the second son, who immediately replies ‘yes, yes father,’ does not actually do so,” he said.

“Obedience does not consist of saying ‘yes’ or ‘no’, but of acting, of cultivating the vineyard, of bringing about the Kingdom of God, in doing good.”

Pope Francis explained that Jesus used this parable to call people to an understanding that religion should affect one’s life and attitudes.

“With His preaching on the Kingdom of God, Jesus opposes a religiosity that does not involve human life, that does not question the conscience and its responsibility in the face of good and evil,” he said. “Jesus wants to go beyond a religion understood only as external and habitual practice, which does not affect people’s lives and attitudes.”

While acknowledging that the Christian life demands conversion, Pope Francis emphasized that “God is patient with each one of us.”

“He [God] does not tire, He does not desist after our ‘no’; He leaves us free even to distance ourselves from Him and to make mistakes … But He anxiously awaits our ‘yes’, so as to welcome us anew in His fatherly arms and to fill us with His boundless mercy,” the pope said.

After praying the Angelus with the pilgrims gathered under umbrellas in a rainy St. Peter’s Square, the pope asked people to pray for peace in the Caucasus region, where Russia staged joint military exercises with China, Belarus, Iran, Myanmar, Pakistan, and Armenia last week.

“I ask the parties to the conflict to make concrete gestures of goodwill and brotherhood, which can lead to solving problems not with the use of force and arms, but through dialogue and negotiation,” Pope Francis said.

Pope Francis also greeted the migrants and refugees present at the Angelus as the Church celebrates the World Day of Migrants and Refugees and said that he was praying for small businesses affected by the coronavirus pandemic.

“May Mary Most Holy help us to be docile to the action of the Holy Spirit. He is the One who melts the hardness of hearts and disposes them to repentance, so we may obtain the life and salvation promised by Jesus,” the pope said. 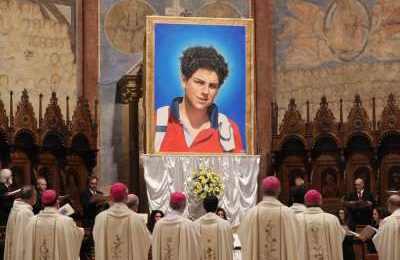 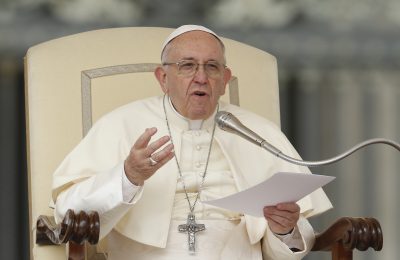 Pope at Audience: ‘Make love go viral in the light of faith’ 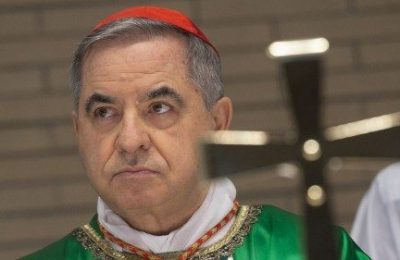