Home Vatican News Pope Francis: ‘The Church is the work of the Holy Spirit’ 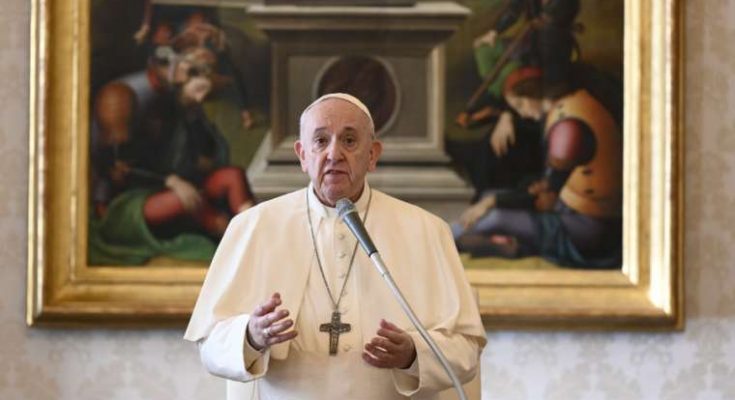 In his address Nov. 25, the pope said that the four fundamental qualities were present in the early Church as described in the Book of Acts. They were listening to the apostles’ teaching, the safeguarding of mutual communion, the breaking of the bread, and prayer.

“Any situation needs to be evaluated in the light of these four coordinates. Whatever is not part of these coordinates lacks ecclesiality, it is not ecclesial,” he said.

In his audience address, the pope continued his cycle of catechesis on prayer, which he began in May. Speaking via livestream from the library of the Apostolic Palace due to coronavirus restrictions, he noted that the first Christians did not neglect prayer, even though they were “on the move.”

“The image of the early Community of Jerusalem is the point of reference for every other Christian experience. Luke writes in the Book of Acts: ‘And they devoted themselves to the apostles’ teaching and fellowship, to the breaking of bread and the prayers’ (2:42). The community persevered in prayer,” he explained.

“We find here four essential characteristics of ecclesial life: listening to the apostles’ teaching, first; second, the safeguarding of mutual communion; third, the breaking of the bread; and fourth, prayer.”

He continued: “They remind us that the Church’s existence has meaning if it remains firmly united to Christ, that is, in community, in His Word, in the Eucharist and in prayer — the way we unite ourselves to Christ.”

“Preaching and catechesis bear witness to the words and actions of the Teacher; the constant quest for fraternal communion shields us from selfishness and particularisms; the breaking of the bread fulfils the sacrament of Jesus’ presence among us. He will never be absent — particularly in the Eucharist, He is there. He lives and walks with us. And lastly, prayer, which is the space of dialogue with the Father, through Christ in the Holy Spirit.”

The pope added: “Everything in the Church that grows outside of these ‘coordinates’ lacks a foundation. To discern a situation, we need to ask ourselves about these four coordinates: how in this situation these four coordinates are present -– the preaching, the constant search for fraternal communion, charity, the breaking of the bread (that is, the Eucharistic life), and prayer.”

Speaking off the cuff, the pope said it pained him when he encountered communities that neglected the four authentic hallmarks of the Church.

“At times, I feel tremendous sadness when I see a community that has good will, but takes the wrong road because it thinks that the Church is built up in meetings, as if it were a political party,” he said.

“‘But, the majority, the minority, what do they think about this, that and the other… And this is like a synod, the synodal path that we must take…’ I ask myself: ‘But where is the Holy Spirit there? Where is prayer? Where is communitarian love? Where is the Eucharist?’”

The four coordinates can be used to judge whether a situation is truly ecclesial, he said. If any of the coordinates is lacking, then the Holy Spirit will also be absent.

“It is for this reason that the Church does not grow with these things: it does not grow through proselytism, as any other company, it grows by attraction. And who provokes attraction? The Holy Spirit.”

“Let us never forget Benedict XVI’s words: ‘The Church does not grow through proselytizing, she grows by attraction.’ If the Holy Spirit is lacking, who is the one who attracts [people] to Jesus, the Church is not there. There might be a beautiful friendship club, good, with good intentions, but not the Church, not synodality.”

Pope Francis noted that in the Acts of the Apostles, prayer gatherings were a “powerful driving force of evangelization.”

He said: “The members of the first community — although this always applies, even to us today — sensed that the narrative of the encounter with Jesus did not stop at the moment of the Ascension, but continued in their life. In recounting what the Lord said and did — listening to the Word — in praying to enter into communion with Him, everything became alive.”

Like the first Christians, believers today can also be inspired by the Holy Spirit in prayer, the pope added.

“And every Christian who is not afraid to devote time to prayer can make his or her own the words of the Apostle Paul, who says this: ‘the life I now live in the flesh I live by faith in the Son of God, who loved me and gave himself for me’ (Galatians 2:20).”

“Prayer makes you aware of this. Only in the silence of adoration do we experience the whole truth of these words. And we must recapture this sense of adoration. To adore, to adore God, to adore Jesus, to adore the Spirit. The Father, the Son and the Spirit: to adore. In silence.”

“The prayer of adoration is that prayer that makes us recognize God as the beginning and the end of all of History. And this prayer is the living flame of the Spirit that gives strength to witness and to mission.”