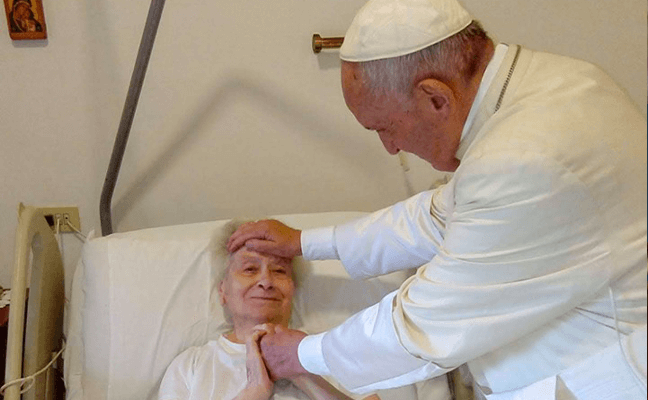 Pope Francis took advantage of his lighter summer schedule to make a surprise visit to a convalescing Daughter of Charity earlier this week.

Sr. Maria Mucci, 74, has spent her entire religious life serving guests and Pope Francis in the Vatican’s Casa Santa Marta. Since undergoing a surgery in October, she has been recovering in the infirmary at her congregation’s provincial house in Rome.

Pope Francis made a brief visit to see Mucci at the Regina Mundi House in the evening July 28. He also greeted the other religious sisters of the Daughters of Charity and stopped by the congregation’s chapel to venerate a first-class relic of St. John Paul II.

The Daughters of Charity were gifted St. John Paul II’s bloodstained shirt by Rome’s Gemelli Hospital. It was the shirt the Polish pope was wearing May 13, 1981, when he was shot in the chest in St. Peter’s Square.

The sisters keep the relic in their chapel for members of the public to venerate.

Information about the surprise papal visit, and photos, were shared on Facebook by Vincentian Fr. Tomaž Mavrič, the order’s superior general.

A Daughter of Charity, Sr. Stefania, told L’Osservatore Romano that most recently, Mucci oversaw the kitchen at the Casa Santa Marta and “she was proud to be able to personally provide the vegetables for the Holy Father.”

Mucci is also known in her community for “her intense presence of prayer,” Sr. Stefania told the Vatican newspaper. After Pope Francis’ visit, Mucci reportedly said: “But look! My illness made all the Regina Mundi sisters happy that were able to meet the pope!”