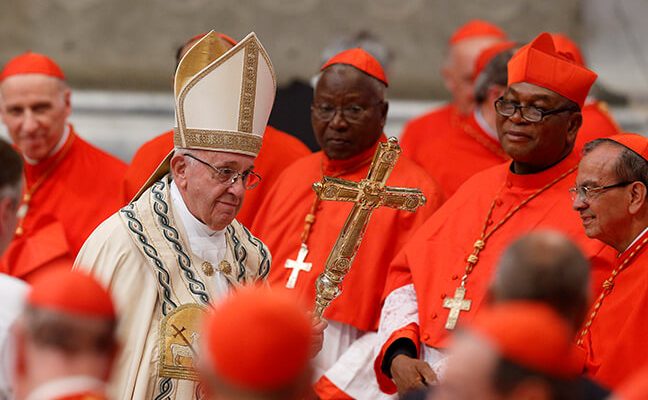 Pope Francis Sadden of The Death of Two Cardinals

POPE FRANCIS SADDEN OF THE DEATH OF TWO CARDINALS

The Director of the Holy See Press Office, Matteo Bruni in a bulletin communication to Journalist of the press office stated the Holy Father’s sadness of the death of Cardinal Roger Etchegaray, which took place yesterday afternoon.

In a Holy Mass, celebrated in the Apostolic Nunciature of Maputo, Mozambique, the Pope recalled the French cardinal a man of dialogue and peace, and with him Cardinal José de Jesús Pimiento Rodríguez, who died on September 3.

Attached are the biographies of the two Cardinals.

Cardinal Roger Etchegaray, President emeritus of the Pontifical Council of Justice and Peace and Pontifical Council “Cor Unum”, was born 25 September 1922 in Espelette, diocese of Bayonne, France. His father was an agricultural mechanic. After studying at the minor seminary at Ustaritz, he continued his spiritual and scientific preparation at the major seminary at Bayonne and at the Pontifical Gregorian University in Rome, obtaining a licentiate in sacred theology and a doctorate in canon law.

Ordained a priest 13 July 1947, he began his first pastoral ministry in his native diocese, that of Bayonne, before becoming, in 1961, deputy director of the secretariat of the French episcopate, and engaged, at the same time, in the creation of a secretariat for pastoral care. From 1966 to 1970, he filled the post of Secretary-General of the French episcopate, before becoming titular Bishop of Gemelle di Numidia and Auxiliary Bishop of Paris on 29 March 1969. On 22 December 1970, he became Archbishop of Marseilles (until 1984) and in 1975 succeeded Cardinal Marty as president of the French Episcopal Conference. He was re-elected on 27 October 1978 (until 1981). From 25 November 1975 until 23 April 1982, he has also been prelate of the “Mission de France”.

Even before becoming a Bishop and particularly after his episcopal ordination (27 May 1969), he played a very important part on the international ecclesial level. From 1965, the year of the close of the Second Vatican Council, he was secretary of the liaison committee of the European Episcopal Conferences, and in 1971 he became the first president of the new European Council of Episcopal Conferences. He was re-elected to the office in 1975. His term of office expired at the end of the work of the Fourth Symposium which took place in Rome from 17-21 June 1979. He was also one of the main architects of the European ecumenical meeting at Chantilly.

He also took part in the work of the Synod of Bishops and was also, in 1974, a member of the council of the Synod secretariat. His theological and socio-religious interventions recall the commitment of a living Church.

Well prepared on a theological level and thoroughly familiar with the problems of France and of the French Church, he has given lectures on his researches and reflections at important meetings and cultural centre. He also has written about the most burning ecclesial and social problems, defence of human rights as a necessity of conscience and recalls the serious problem of unemployment.

On 8 April 1984, he was called to Rome and was nominated President of the Pontifical Council of Justice and Peace (he stayed until 24 June 1998) and President of the Pontifical Council Cor Unum (he stayed until 2 December 1995). Throughout the years, Cardinal Etchegaray has always carried out an untiring service in favour of peace, human rights and needs of the poor, bringing the message and love of the Pope to many nations.

On 15 November 1994, he was named President of the Central Committee of the Holy Year 2000. On 30 April 2005, the Holy Father Benedict XVI approved the election by the Cardinals of the Order of Bishops, of Cardinal Etchegaray as Vice Dean of the College of Cardinals.

On June 10th 2017, the Holy Father accepted the request presented by Cardinal Etchegaray to be dispensed from the office of the Vice Dean of the College of Cardinals.

Created and proclaimed Cardinal by St. John Paul II in the consistory of 30 June 1979, of the Title of the Suburbicarian Church of Porto-Santa Rufina (24 June 1998). Cardinal Roger Etchegaray died on 4 September 2019.

Cardinal José de Jesús Pimiento Rodríguez, Archbishop emeritus of Manizales, was born on 18 February 1919 in Zapatoca, Colombia. Despite his family’s economic hardship, he was able to fulfil his dream of becoming a priest. He was ordained on 14 December 1941.

He began serving as coadjutor vicar in parishes in Mogotes and in the Cathedral of San Gil y Vélez.  He was prefect and professor of the seminary, chaplain of the hospital of San Gil and coordinator of Social Action and diocesan Catholic Action.

He was appointed by Pope Pius XII as titular bishop of Apollonide and auxiliary of Pasto on 14 June 1955, receiving episcopal consecration on 28 August of the same year.

Four years later, John XXIII appointed him Bishop of Montería on 30 December 1959.  In February 1964, he was appointed as bishop of Garzón by Pope Paul VI.

After participating in Vatican II, he was a delegate to the general conferences of the Latin American episcopate, held in Medellín in 1968, in Pueblo de Los Ángeles, Mexico in 1979, and in Santo Domingo in 1992.

In 1972, he was appointed the president of the Episcopal Conference of Colombia and served for six years. During that time he participated in several Synods and from 1972-1973 he was a counsellor at the Apostolic Nuncio in Colombia for dialogue with the government in the revision of the accord.

On 22 May 1975, he became Archbishop of Manizales and served there for 21 years, placing great emphasis on applying Vatican II decrees, especially in the pastoral care of the family, of the youth and of society. He promoted the Council’s proposed renewal with parishes and the major archdiocesan seminary, in addition to updating the process of formation for priests and other vocations.

Throughout his episcopate, he helped to realize centres for evangelization and catechesis in the archdiocese. He organized the restoration of the two of the Cathedral’s bell towers which had been damaged in the earthquake of 1979, the same year in which he organized the restructuring of the minor seminary which then became the archdiocesan major seminary. Following the eruption of the Nevado del Ruiz volcano in 1985, he housed hundreds of people from Chinchiná, Papayal, Los Cuervos, La Guayana de Villamaría, La Paz and Encanto.

In 1995, he resigned as Archbishop of Manizales and retired to the city of Urabá, where he works in pastoral ministry. In 2005, he celebrated the golden jubilee of his episcopate. He is one of the only living Council Fathers left.

Created and proclaimed Cardinal by Pope Francis in the consistory of 14 February 2015, of the Title of San Giovanni Crisostomo a Monte Sacro Alto (St. John Chrysostom in Monte Sacro Alto).

Owing to his age (96 years), he did not come to Rome for the consistory of February 14, 2015, but he received the Bull of the Creation of Cardinals, during a ceremony presided over by H.E. Mons. Ettore Balestrero, Apostolic Nuncio in Colombia, in the Cathedral of Bogotá. It was Cardinal Rubén Salazar Gómez, Archbishop of Bogotá, to place cardinal’s biretta on his head and to give him the cardinalate ring. Cardinal José de Jesús Pimiento Rodríguez died on 3 September 2019.