Home Ghana News Pope Francis: Proclamation of the Gospel always linked to embrace of a Cross 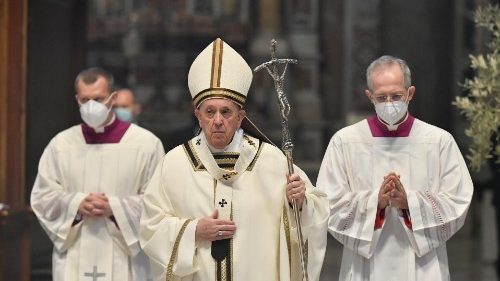 Pope Francis: Proclamation of the Gospel always linked to embrace of a Cross

In his homily during Holy Thursday’s Chrism Mass, Pope Francis underlined that the preaching of the Gospel “is always linked to the embrace of some particular cross.”

The Gospel and the Cross

He explained that the Gospel shows us the extent to which “persecution and the cross are linked to the proclamation of the Gospel.”

Dwelling on the “hours” leading to Christ’s Passion and Death, Pope Francis said “the hour of joyful proclamation, the hour of persecution and the hour of the Cross go together.”

“The gentle light of God’s word shines brightly in well-disposed hearts,” the Pope said, “but awakens confusion and rejection in those that are not. We see this over and over again in the Gospels.”

Giving some examples, Pope Francis spoke of the good seed sown in the field that bears fruit, but it also arouses the envy of the enemy.

“The tender love of the merciful father irresistibly draws the prodigal son home, but also leads to anger and resentment on the part of the elder son,” he noted.

“All this enables us to see that the preaching of the Good News is mysteriously linked to persecution and the cross,” said Pope Francis.

Focusing on two trains of  thought, the Pope said that first “we are taken aback to see the cross present in the Lord’s life at the very beginning of his ministry, even before His birth.”

“All this makes us realize that the mystery of the cross is present ‘from the beginning’.”   “The cross does not appear by chance,” he said.

When his hour came, explained Pope Francis, Jesus embraced the cross fully.  “For on the cross there can be no ambiguity. The cross is non-negotiable.”

Dwelling on his second point, the Pope said, “There is an aspect of the cross that is an integral part of our human condition, our limits and our frailty. Yet it is also true that something happens on the Cross that does not have to do with our human weakness but is the bite of the serpent, who, seeing the crucified Lord defenceless, bites Him in an attempt to poison and undo all His work…  It is the venom of the evil one who keeps insisting: save yourself.”

It is in this harsh and painful “bite” that seeks to bring death, that God’s triumph is ultimately seen, said Pope Francis.

The Pope went on to say that “thanks to the reconciling blood of Jesus, it is a cross that contains the power of Christ’s victory, which conquers evil and delivers us from the evil one.”

Sufferings of Christ in us

Pope Francis underlined that we as Christians are “not among those who shrink back.”

“We are not scandalized, because Jesus Himself was not scandalized by seeing that His joyful preaching of salvation to the poor was not received wholeheartedly, but amid the shouts and threats of those who refused to hear His word.”

“The way we embrace the cross in our preaching of the Gospel makes two things clear,” the Pope said:  “That the sufferings that come from the Gospel are not ours, but rather ‘the sufferings of Christ in us’ and that ‘we do not preach ourselves but Jesus Christ as Lord and ourselves as servants of all for the love of Jesus’”.

Concluding his homily with a story from his past, Pope Francis recalled how, during a dark moment in his life, he asked the Lord for the grace to free him from a difficult and complex situation.

During Confession he asked an elderly Sister, whose eyes were “full of light”  to pray for him as her penance because he needed a particular grace.

She replied by saying ‘The Lord will certainly give you that grace, but make no mistake about it: He will give it to you in His own divine way’.

The Pope said that this advice did him much good, “hearing that the Lord always gives us what we ask for, but that He does so in his divine way. That way involves the cross. Not for masochism.  But for love, love to the very end.”