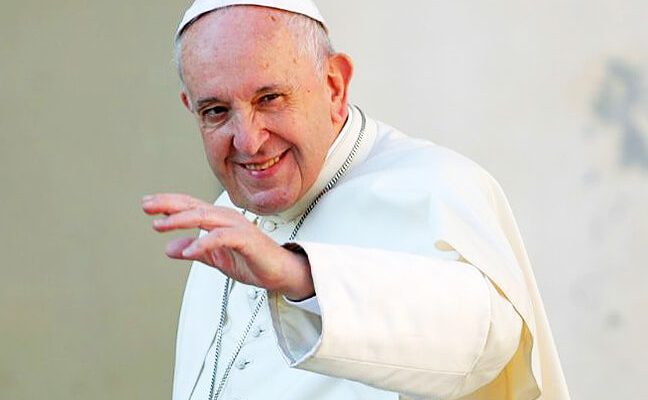 His vocation dates back to 21 September 1953, the Feast of St. Matthew, the tax collector converted by Jesus: it was during a confession that day, that the future Pope had a profound experience of God’s mercy.

The priest and mercy

Divine Mercy has characterized his entire priestly life. Pope Francis speaks of priests as quietly leaving everything to engage in the daily life of communities, giving others their own lives, moved, like Jesus, when he sees people exhausted and “like sheep without a shepherd”.

Addressing parish priests in Rome on 6 March 2014, the Pope said: “In the image of the Good Shepherd, the priest is a man of mercy and compassion, close to his people and a servant to all… Whoever is wounded in life, in whatever way, can find in him attention and a sympathetic ear….Wounds need to be treated… We priests must be there, close to these people. Mercy first means treating the wounds”.

The priest and the Eucharist

Pope Francis describes the priest as a decentralized man, because at the center of his life there is not him but Christ. In his homily during the Jubilee for Priests on 3 June 2016, he said: “In the Eucharistic celebration we rediscover each day our identity as shepherds. In every Mass, may we truly make our own Christ’s words: ‘This is my Body, which is given up for you’. This is the meaning of our life: with these words, in a real way we can daily renew the promises we made at our priestly ordination”.

The priest and the confessional

The priest plays an important part of his service to God and His people in the confessional, where he can become an expression of God’s mercy. Addressing parish priests in Rome on 6 March 2014, Pope Francis said: “It is normal that there be differences in the style of confessors, but these differences cannot regard the essential, that is, sound moral doctrine and mercy. Neither the laxist nor the rigorist bears witness to Jesus Christ, for neither the one nor the other takes care of the person he encounters.

The rigorist washes his hands of them: in fact, he nails the person to the law, understood in a cold and rigid way; and the laxist also washes his hands of them: he is only apparently merciful, but in reality he does not take seriously the problems of that conscience, by minimizing the sin. True mercy takes the person into one’s care, listens to them attentively, approaches the situation with respect and truth, and accompanies them on the journey of reconciliation”.

The priest and prayer

Pope Francis has always said that the priest needs to be, above all, a man of prayer. It is union with God, he says, that overcomes the countless temptations of evil. In his Letter to Priests marking the 160th anniversary of the death of the Curé of Ars, the Pope suggests reciting the Rosary every day. “To contemplate Mary”, he writes, “is to believe once again in the revolutionary nature of love and tenderness. In her, we see that humility and tenderness are not virtues of the weak but of the strong, who need not treat others poorly in order to feel important themselves”.

The priest and the poor

According to Pope Francis, a priest’s spirituality is embodied in the reality of everyday life. His is a prophetic voice in the face of the oppression that tramples on the poor and the weak. In Evangelii gaudium, para. 183, he writes of how the Church “cannot and must not remain on the side-lines of the struggle for justice”. The Kingdom of God begins here on earth and it is already here that we encounter Jesus: the last judgment will focus precisely on what we have done to Christ in the poor, the sick, strangers, prisoners. We will be judged on how we have loved. But, as Saint John Paul II said, there can be no love without justice.

The priests risking their lives

In his Letter to Priests for the 160th anniversary of the death of the Curé of Ars, Pope Francis thanks those priests “who make their lives a work of mercy in regions or situations often inhospitable, distant or abandoned, even at the risk of their own lives”. He thanks them “for their courageous and constant example” and invites them not to be discouraged, because “the Lord is purifying His Bride and is converting all of us to Himself”

In the same Letter, Pope Francis addresses the question of abuse. While confirming his closeness to the victims, he expresses his gratitude “to all those priests who faithfully and generously spend their lives in the service of others”.

The priest and weariness

During the Chrism Mass in St Peter’s Basilica, on Holy Thursday 2015, Pope Francis spoke openly about “the tiredness of priests”, saying it was frequently on his mind. “I think about it and I pray about it often”, he said, “especially when I am tired myself. I pray for you as you labour amid the people of God entrusted to your care, many of you in lonely and dangerous places. Our weariness, dear priests, is like incense which silently rises up to heaven. Our weariness goes straight to the heart of the Father”. The Pope described this weariness as something positive, because it comes from being in the midst of people: “It is the tiredness of the priest with the smell of sheep”.

The priest and humour

Pope Francis often reminds priests “the saint is capable of living with joy and a sense of humor”. This joy comes from union with Jesus, he says, adding that he himself prays for a sense of humour every day. In a November 2016 interview with Italy’s TV2000, the Pope described how “a sense of humour lifts you up”. It is something very human, he said, but it is also close to the grace of God.

The Pope’s appeal to support priests

Pope Francis asks priests to be always close to the people, but at the same time he asks the faithful to support their priests. During his homily at the Chrism Mass on 28 March 2013, he said: “Dear lay faithful, be close to your priests with affection and with your prayers, that they may always be shepherds according to God’s heart”.

Share this
TAG50th priestly anniversary Pope Fracis
Previous Post(Opinion) Pregnant women and the struggle of spirituality Next PostConversations in the Cathedral: Full reflection by Most Rev. Joseph Osei Bonsu