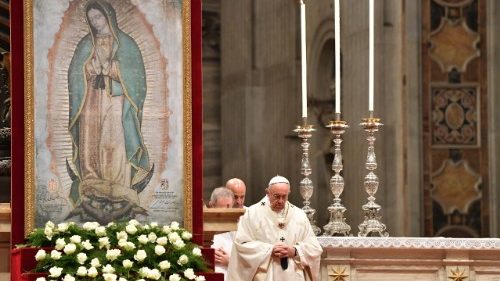 Pope Francis: Free Mary from associations with the mafia

Pope Francis is calling for authentic devotion to the Blessed Virgin Mary to be freed from “superstructures, powers or conditioning that does not correspond to the Gospel criteria of justice, liberty, honesty, and solidarity.” The exhortation comes in a letter, made public on Thursday, which is addressed to the President of the Pontifical International Marian Academy, Father Stefano Cecchin.

In his letter, the Pope takes note of an ad hoc Department created within the Academy to study criminal and mafia phenomena, precisely in order “to free the figure of Our Lady from the influence of criminal organizations.”

Safeguarding the purity of our heritage

“The task of the Academy is to give a healthy Mariological formation in view of a healthy popular piety,” says Fr Cecchin in an interview with Vatican News’ Amedeo Lomonaco. “We must rediscover the religious and cultural heritage that we have all over the world, but especially in Italy – a heritage that we must re-evaluate and safeguard in its original piety.”

In Italy and elsewhere, Marian and other Catholic devotions are often maliciously incorporated into mafia rituals, in a distortion of authentic spirituality, as, for example, when statues or images of the Blessed Virgin are made to bow before the houses of mob bosses during processions. “We want to eradicate [this distorted use of devotion] through the formation of people, of families,” says Fr Cecchin.

He says that the misuse of devotion “is not religion! It’s superstition.” Mafia leaders, he says, are trying “to teach the people that God is with them. So they also want to use people’s religious feelings not to lead them to be free, but slaves.”

Working together for the common good

The Marian Academy is organizing a conference in September which will draw up guidelines for the new Department. The conference will include not only theologians and Mariologists, but also judges, criminologists, lawyers, police officers, and civic leaders.

The plan, says Fr Cecchin, is to hold a national conference each year on May 13 to present the fruit of the Department’s work. “What we reiterate is that we must work together, but each with their own identity, without confusing the State, the Church, and other organizations,” he says. “We must work for the common good.”

Recalling the teaching of Pope Francis, Fr Cecchin says the Holy Father “has told us that the Academy should be a place of encounter, a place of dialogue.” One aspect of this is the work the Academy is doing with Muslims. “We have created the Muslim Christian Marian Commission,” says Fr Cecchin. “We will also begin courses with the mosque of Rome and discuss these aspects of bad interpretations of religion with them, or how religion is used to divide and create problems.” On the contrary, he says, “God is love, and not fear or punishment.”