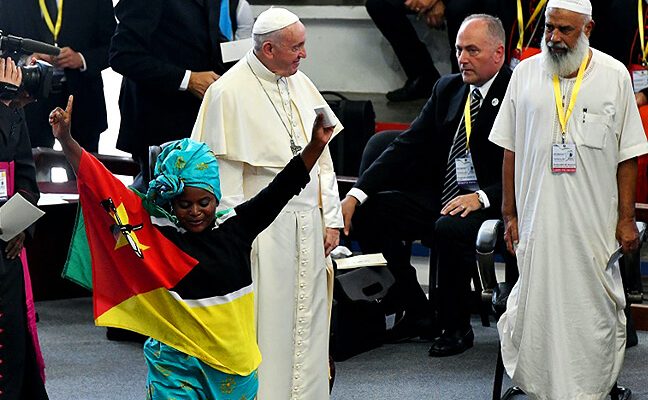 The Holy Father Francis has expressed his personal gratitude and that of the larger international community for the efforts made in recent decades to ensure that peace is once more the norm and reconciliation the best path to confront the difficulties and challenges that Mozambique face as a Nation.

“In this spirit and with this intent a month ago you signed in Serra da Gorongosa the Agreement for a definitive cessation of military hostilities between brother Mozambicans.  A landmark that we greet with the hope that it will prove decisive and a further courageous step on the path of peace that began with the General Peace Agreement of 1992 in Rome.”  Said the Pontiff

The Holy Father made the statement at a meeting with the President of the Republic of Mozambique, H. E. Filipe Jacinto Nyusi, Government Officials, and Members of the Diplomatic Corps and the Representatives of the Civil Society at the Palazzo Ponta Vermelha.

The Holy Father is currently in Maputo, Mozambique as part of his 6days Apostolic Journey to Mozambique, Madagascar and Mauritius.

He added that since the signing of the historic treaty that sealed the peace and has gradually begun to bear fruit, fruits that sustain hope and the determination to make Mozambique’s future not one of conflict, but of the acknowledgement that you are all brothers and sisters, sons and daughters of a single land, stewards with a shared destiny.

The pontiff further added that courage brings peace, genuine courage not the courage of brute force and violence, but one expressed concretely in the tireless pursuit of the common good.

“You have experienced suffering, sorrow and affliction, but you have refused to let human relationships be governed by vengeance or repression or to allow hatred and violence to have the final word.” Said Pope Francis.

As my Predecessor, Saint John Paul II recalled during his visit to your country in 1988: “Many men, women and children suffer from lack of housing, adequate food, schools for instruction, hospitals for health care, churches in which to meet and to pray, and fields to provide workers with labour. Thousands of persons are forced to relocate in order to find security and the means of survival; others have taken refuge in nearby countries.  No to violence, and yes to peace!” Said, Pope Francis

He encouraged the nation to continue their efforts to build up the structures and institutions needed to ensure that no one feels abandoned, especially the young who make up so great a part of your country’s population.