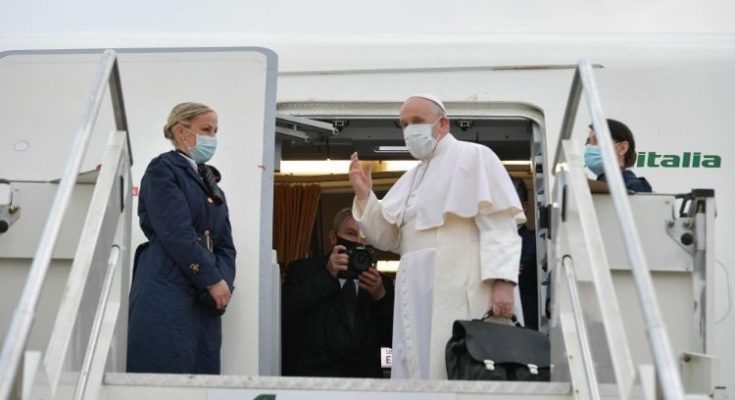 The Pope boarded an Alitalia A330 at Fiumicino airport on Friday morning to begin his visit to the Middle Eastern nation of Iraq.

The papal plane took off at 7:45 AM, and is due to land at Baghdad’s International Airport around 2 PM local time. This will be the first time a Pope visits Iraq. 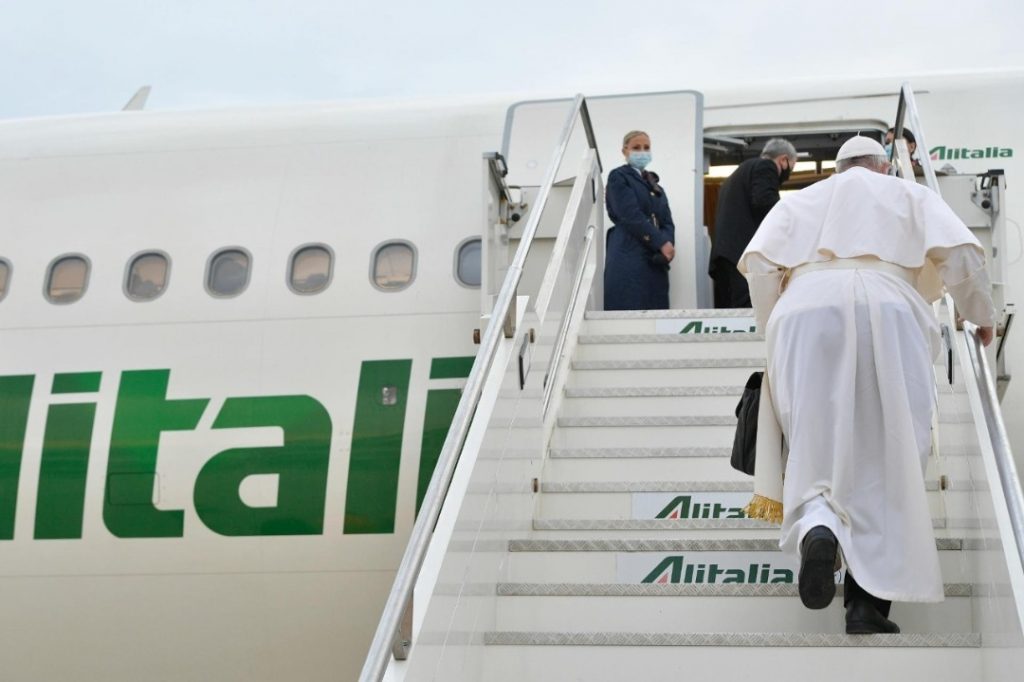 Before leaving the Casa Santa Marta on Friday morning, Pope Francis met briefly with around a dozen Iraqi refugees living in Italy.

The refugees are assisted by the Community of Saint Egidio and the Auxilium Cooperative. There were accompanied by Cardinal Konrad Krajewski, the Papal Almoner, according to Matteo Bruni, Director of the Holy See Press Office.

As the Pope set off, a little-known Shia militia group active in Iraq declared a unilateral, temporary ceasefire to coincide with his visit. The Guardians of Blood Brigade announced in a statement that they would “suspend every form of military operation during the visit of the Pope, in respect of Imam al-Sistani and in the name of Arabic hospitality.”

Known in Arabic as “Saraya Awliya al-Dam”, the group claimed the 16 February rocket attack on a US-led coalition airbase in Erbil, which killed one military contractor.

Afterwards, he will travel to the Syro-Catholic Cathedral of “Our Lady of Salvation” and meet with Bishops, priests, religious persons, seminarians and catechists.

On Saturday, Pope Francis will travel by plane to the cities of Najaf and Ur, before returning to Baghdad.

Due to depart from Baghdad at 7:45 AM, the Pope’s first event of the day is a courtesy visit in Najaf to Grand Ayatollah Sayyid Ali al-Husayni al-Sistani, described as one of the leading spiritual leaders of Iraq’s Shia Muslims.

He will then depart for Nassiryiaat 10:15, in order to lead an interreligious meeting at the Plain of Ur shortly after 11:00.

The Pope will then return to Baghdad, where, at 6:00 PM he will celebrate the Divine Liturgy at the Chaldean Cathedral of Saint Joseph.

On Sunday, his third day in Iraq, Pope Francis will travel to Erbil, Mosul and Qaraqosh.

In Mosul, where he is due to arrive at 9:35 AM, Pope Francis will lead a prayer of suffrage for war victims, at Hosh al-Bieaa (Church square).

He will then travel to Qaraqosh where he will visit the faithful at the Church of the Immaculate Conception.

Afterwards, he will return to Erbil, where at 4:00 PM he will celebrate Holy Mass at the “Franso Hariri” stadium. The Pope will then travel back to Baghdad, where he is due to arrive at 7:15 PM.

Finally, on Monday, Pope Francis will depart from Baghdad International Airport at 9:40 AM, following a brief farewell ceremony

He is expected to arrive at Rome’s Ciampino Airport at 12:55 PM.