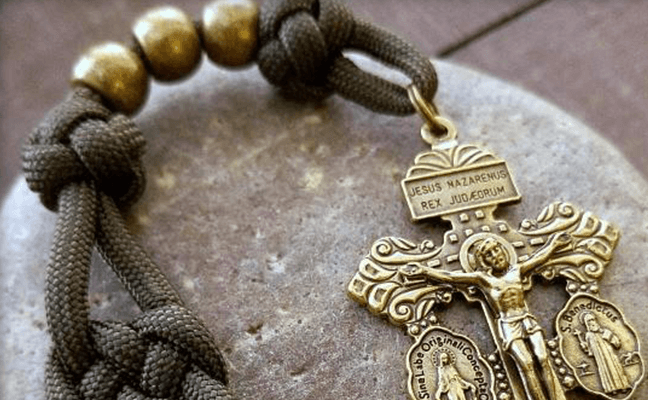 At the Santa Marta residence, the Holy Father Francis received a delegation from the Pontifical Aid to the Church that Suffers and Blessed 6000 Chapters of the Rosary which will be distributed to Syrian Christians of all denominations on September 15, whose relatives they were abducted or killed during the war, as part of the “Consola il Popolo” prayer campaign promoted by ACS together with the Catholic and Orthodox Churches of Syria.

It is not the first time that the Pope adheres to an initiative of the Foundation for the benefit of the tormented Syrian population. On Sunday, December 2, after the Angelus, Pope Francis lit a candle adhering to the ACS prayer campaign “Candles for Peace in Syria”.

Also in the margins of Angelus prayer on 15th August 2019, the Holy Father reiterated his closeness to the Syrian people and praised the ecumenical initiative “console my people” by ACS.

The six thousand rosaries blessed by the Holy Father were made by Christian artisans of Bethlehem and Damascus and will be distributed in numerous Syrian parishes on September 15, on the occasion of the feast of the Seven Sorrows of the Blessed Virgin Mary. During the Holy Masses and the different processions, the faithful will pray for the killed and their families.

Around 2000 Christian families have lost one of their loved ones during the conflict, 800 of those kidnapped. Together with the Rosaries will be distributed Bibles in Arabic donated by ACS and the olive crosses in the Holy Land donated by the Orthodox Church.

That same day the Holy Father will again take part in the initiative, blessing at the end of the Angelus, the icon of the “Blessed Virgin Mary of Sorrows, comforter of the Syrians donated by the Orthodox Church.

The delegation received on 15th August 2019 by the Pope in Santa Marta included the international executive president of ACS, Thomas Heine-Geldern, and the directors of some European national headquarters of the Foundation, including the director of ACS-Italy, Alessandro Monteduro.

“The Holy Father has supported our commitment to Syria and the Middle East on various occasions. His support for this new initiative of ours is very important for us and his closeness is of great consolation for those who have lost loved ones because of the war,” commented Heine Geldern, recalling that since the beginning of the Syrian conflict ACS has financed 850 projects benefiting the Syrian people for a total of over 35 million euros, allowing numerous Christian Syrian families to remain in their native land.

But material assistance is not enough says Thomas Heine-Geldern – the Syrian people need spiritual support and closeness in prayer. And this is precisely the meaning of the initiative “Consola my people”.

Share this
TAGPope Francis Rosaries Syria
Previous PostPope at Angelus: Fire of God’s love burns in charity Next PostWe can improve quality of education by being 'watchdogs' - Archbishop Kwofie

One thought on “Pope Francis blesses 6000 Rosaries for syria, supports campaign of solidarity”