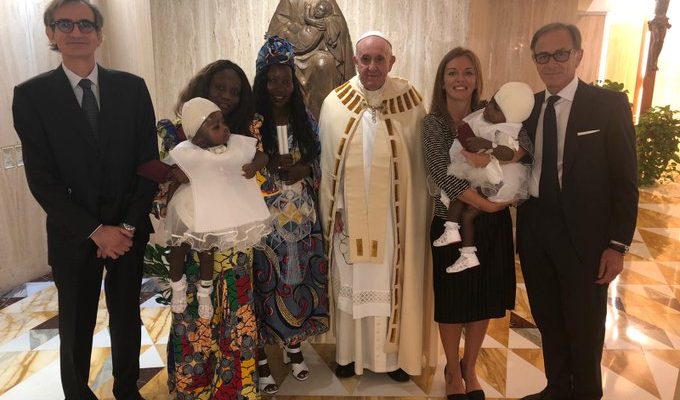 Pope Francis has baptised twins who were born conjoined at the head and were separated at the Vatican’s pediatric hospital.

The twins’ mother had said at a press conference following the successful surgery at the Bambino Gesù Hospital on June 5 that she wanted the twins to be baptised by the pope.

“If we had stayed in Africa I don’t know what fate they would have had. Now that they are separate and well, I would like them to be baptised by Pope Francis who has always taken care of the children of Bangui,” said the girls’ mother Ermine, who came with the twins from the Central African Republic for the surgery, July 7.

Antoinette Montaigne, a Central African politician, posted a photo on Twitter of Pope Francis with the twins in their baptismal gowns on August 7, writing that the pope had baptized the separated twins the day prior.

The Italian news agency ANSA reported August 10 that the twins had been baptised at the pope’s residence, Casa Santa Marta.

Following the surgery in June, Dr. Carlo Efisio Marras, director of neurosurgery of the Bambino Gesù hospital told CNA that the twins have a high chance of living normal lives after undergoing the 18 hour operation which involved more than 30 medical staff.

The twins, Ervina and Prefina, were born on June 29, 2018, in a village about 60 miles outside Bangui, the capital of the Central African Republic. They were joined together with “one of the rarest and most complex forms of cranial and cerebral fusion,” known as total posterior craniopagus, according to the Bambino Gesu hospital.

Mariella Enoc, president of the Bambino Gesù, met the twins in July 2018, during a visit to Bangui, where the sisters had been transferred after their birth. Enoc was helping to oversee the expansion of pediatric services in the country, which is one of the world’s poorest, in response to an appeal from Pope Francis. She decided to bring the girls to Rome for surgery.

A multidisciplinary team, including neurosurgeons, anesthesiologists, and plastic surgeons, prepared for more than a year for the operation to separate the twins. The hospital’s ethics committee contributed to a plan ensuring that the girls would have the same quality of life.

The hospital said the twins were joined via the back of the head, including the nape, sharing both skin and cranial bones. But the greatest challenge for doctors was that they were joined at a deeper level, sharing membranes inside the skull as well as the venous system, through which blood used by the brain is transported back to the heart.

The separation took place in three stages. In the first, in May 2019, neurosurgeons started to separate and rebuild the membranes and venous systems.

The second, a month later, focused on the confluence of sinuses in the brain. The hospital said it was a critical phase of the treatment as “the operating space is a few millimeters.”

The two operations prepared the girls for the third and final phase of complete separation on June 5.

“From a neurological standpoint, the two little girls are doing very well and have excellent prognosis for normal lives in the future,” Marras said.