Home Vatican News Pope calls all Christians to pray Our Father together, March 25 at noon 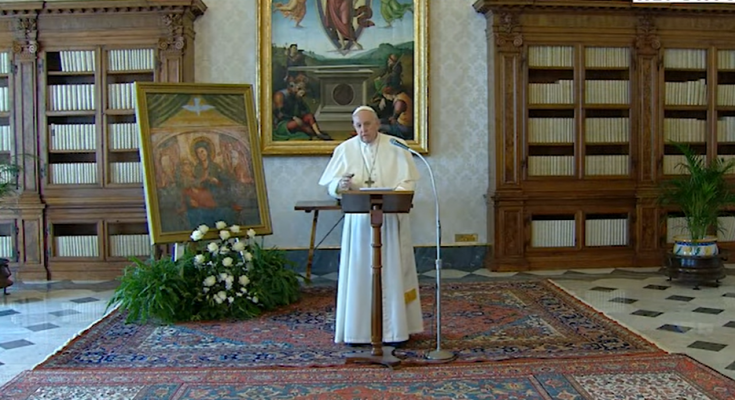 Pope calls all Christians to pray Our Father together, March 25 at noon

Pope Francis on March 22 has invited all Christians of the globe to unite on March 25 at noon to pray the Our Father together — so that as the entire world is suffering from the pandemic, so the Lord might hear all of Christendom united in prayer.

On that day, Catholics and many Christians are celebrating the Annunciation, the day Gabriel visited Our Lady and thus the feast of the Lord becoming flesh within the womb of the Virgin.

The pope made the invitation at the end of the Angelus address, live-streamed from the Apostolic Library.

He also said that on Friday, March 27, he will spend time in prayer in St. Peter’s, starting at 6 pm. He invited the faithful to tune in to the ceremony, which will include the Liturgy of the Word, and benediction with the Blessed Sacrament. He said he will give an “urbi et orbi” apostolic blessing — “to the City of Rome and the world” — with the possibility of attaining a plenary indulgence.

The urbi et orbi blessings are usually given on solemn occasions — Christmas, Easter, and when a new pope is elected, as his first blessing for the world.

After the end of his reflection in the Apostolic Library, the pope went to the window overlooking the empty St. Peter’s Square, and blessed the security guards and, symbolically, the world.