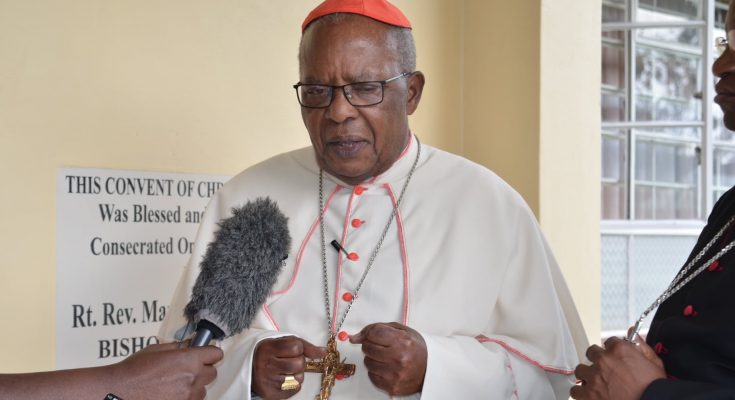 Cardinal Njue, who was born in Kiriari, Embu District, Kenya, in 1944, has served as Archbishop of Nairobi since 2007.

In 1974 he was appointed philosophy professor and dean of students at St. Augustine Senior Seminary, Mabanga in Bungoma, of which he was also rector from 1978 to 1982.

In 1982, he was appointed to Chuka Parish as its first African parish priest. He then served as rector of St. Joseph’s Philosophicum Seminary in Nairobi until his appointment on 9 June 1986 as the first Bishop of Embu. He was ordained bishop on 20 September of that year and then coadjutor Archbishop of Nyeri on 23 January 2002. From 2005-2006, he was Apostolic Administrator of the Vicariate of Isiolo. He was also Apostolic Administrator of the diocese of Murang’a (2006-2009).

On 6 October 2007 he was appointed Archbishop of Nairobi.

He has been chairman of various commissions, such as the Episcopal commission for major seminaries in Kenya and the Kenya Episcopal Conference’s Justice and Peace Commission.

From 2006 to 2015 he was president of the Kenya Episcopal Conference.

He participated in the conclave of March 2013, which elected Pope Francis.

Created and proclaimed Cardinal by Benedict XVI in the consistory of 24 November 2007, of the Title of Preziosissimo Sangue di Nostro Signore Gesù Cristo (Most Precious Blood of Our Lord Jesus Christ).