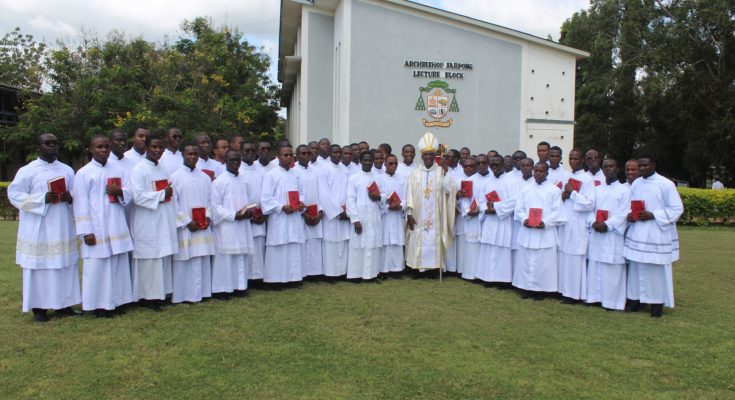 The governing council of these two seminaries is made up of the Bishops of the Accra, Cape Coast and Kumasi ecclesiastical provinces together with the Rectors of the two Seminaries and their Vice. This year’s meeting had 9 Bishops present, 2 Vicars General, the Acting Rector of St. Paul’s Seminary and his vice as well as the Rector of St. Peter’s Regional Seminary and his Vice. At the closing session of the meeting, the Bishops met the seminarians, non-teaching staff and formators of the seminary separately.

In the session with the Seminarians, the Bishops urged seminarians not to take lightly the discipline they receive from their formation basing their admonishment on St. Paul’s Letter to the Hebrews 12:5-6. They again advised the seminarians to Pray Hard, Work Hard and Eat Hard. Noting that these three, coupled with obedience, will form them into tough persons and priests such that wherever they find themselves they will stand out. Praying hard for them involves not only joining in the communal prayers or doing individual prayers but involves a wholistic spiritual which must translate in their human relations.

Working hard does not refer to only manual work but also mental work in terms of intellectual formation, regular exercise and workouts for a sound mind rests in a sound body. They by this express their joy seeing that during the second session of their first day of their meeting, they saw and heard the seminarians at games. To eat hard, the bishops cautioned the seminarians on checking what they consume and assimilate. They should take into serious consideration their wholistic health – mental, physical, psychological, social intellectual etc.

The bishops expressed their joy in seeing how clean, neat and tidy the seminary is lauding the hard work and sense of responsibility of the seminarians and urged that they inculcate this into the faithful to have a clean and tidy Ghana. They again lauded the contributions made by the seminarians to their up keep in terms of self-reliance projects. They also acknowledged the generous contributions made by the benefactors of the seminary and prayed for God’s blessings for them urging more people to come to the aid of formation.

Commenting on the budget of the seminaries, the Bishops hinted that only about 23% of funding comes from Rome hence the need for the local church to raise the rest of the 67%. In the light of this they thanked the various year groups that are supporting the seminaries and called on other year groups and individuals to do same. They added that the priests, seminarians and the faithful should erase from their minds those erroneous view that “The Church is Rich” so as to rise contribute to build the church.

The Bishops also called on the faithful to help them pay the debts owed by the Catholic University of Ghana, Fiapre which is their major challenge in their bid to get a presidential chatter for the institution. They noted that the chatter will save them the huge sums of money they pay each year to the public universities they are affiliated to, since they can now award their own degrees from the university. Still on education, when asked about the plans to regain control over the catholic schools, the Bishops responded that it has always been on their agenda and they are tirelessly working at it.

They noted that they have since October 1988, laid before every government a memorandum of understating which will enable them enter into partnership with the government in this regard but till date no government have signed it yet. They have met every Minister of education and Director of Ghana Education since then. However, they are not giving up on the fight.

The Bishops admonished Seminarians and Priests not to lose their catholic identity in an attempt to meet the demands of the faithful in doing things the “charismatic” way. They said as the name of the movement goes “Catholic Charismatic renewal” the emphasis on catholic. As such we must seek first to be catholic and not copy blindly so as to end up fogging our liturgy with “shows and entertainment”.

On the issue of threats and attacks from Islamic Jihadist Extremists, the Bishops said that from their finding from colleague Bishops in countries and dioceses that have experienced these attacks, these are a group of people with political agenda, hiding behind some tenents of Islam to cause mayhem. They noted that Muslims are very good and interesting people that we must relate to in a very cordial manner.

They noted that these people are your own uncles, aunties, cousins, in-laws, family relations and mates hence the faithful as well as priests and seminarians should begin from there, building a better healthy relationship with them and sooner or later it will catch-up with the rest. However, whiles doing this we shouldn’t lay down our guard as these Islamic Jihadist Extremists keep recruiting and brainwashing people for their cause.