Home Ghana News Opinion: Is there a need for religious life in the twenty-first century? 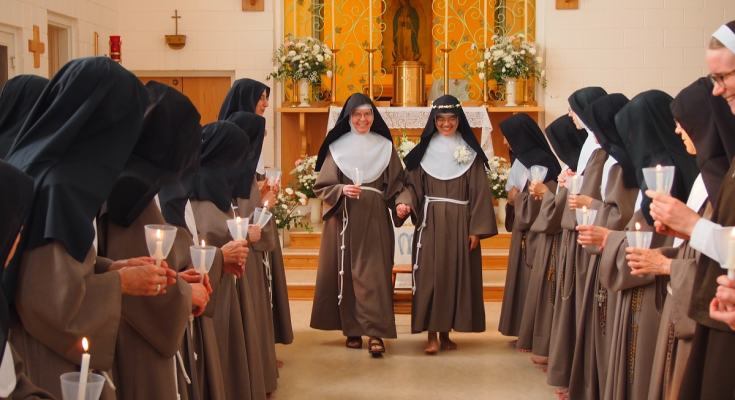 Opinion: Is there a need for religious life in the twenty-first century?

In recent times I have been asking myself whether there is a need for Religious Life in the Twenty-first Century. Somebody may ask why I have been asking this question. In this reflection, I choose to reflect on what the Second Vatican Council said about the Religious and what the Holy Scriptures say about Christian calling.

I would like to begin with what the Bible says. In 1 Peter 2:9, the Evangelist says “But you are a chosen race, a royal priesthood, a holy nation, God’s own people, in order that you may proclaim the mighty acts of him who called you out of darkness into his marvelous light.” This reading situates all Christians in the priesthood of Christ.

Through our baptism, all Christians come to share in the baptismal priesthood. As priests, therefore all are called to be holy and blameless before God. As regard the various ministries, St. Paul in 1 Corinthians 12: 4-6 speaks about the diversity of gifts in the community.

I strongly believe that it was in the light of this that the Second Vatican Council in Lumen Gentium (LG) # 39 and 40 spoke about the universal call to holiness. In LG #39, it states: “Therefore in the Church, everyone whether belonging to the hierarchy, or being cared for by it, is called to holiness.

” Following from this paragraph, LG# 40 explains “….Thus it is evident to everyone, that all the faithful of Christ of whatever rank or status, are called to the fullness of the Christian life and to the perfection of charity.”

From the aforementioned, it is indicative that the call to holiness is not reserved to a particular class of people in the Church. The laity is called to the life of holiness as much as the Bishops, Priests and Religious are called. I must observe here that the Religious though they take the vows of poverty, chastity and obedience, still form part of the laity. Religious Life is not a middle way between the clerical and the lay state (LG # 43).

Concerning the laity, LG # 33 had this to say: “The lay apostolate, however, is a participation in the salvific mission of the Church itself. Through their baptism and confirmation all are commissioned to that apostolate by the Lord Himself.” And so, how different is a Religious sister who is a nurse or teacher different from the other Christian staff at the hospital or the school.

How different is a Religious brother who is a doctor different from all the other Catholic doctors? After all, we are all called to be holy in the same way and we all share in the priesthood of Christ through our baptism. Could a person then argue that Religious Life has no significance today since all Christians are called to do what Religious men and women are doing today?

Is there anything special about Religious Life that many people today especially from Africa and Asia would want to join this austere life?

The one who can accept this should accept it.” Inferring from this, it is clear that many choose to be Religious for the sake of the reign of God. Furthermore, The Vatican Council document makes it clear that despite all Christians having the same universal call to holiness and the perfection of charity, there is still something about Religious Life that cannot be understated.

In LG # 44, the Council Fathers observed that “in order that he or she may be capable of deriving more abundant fruit from this baptismal grace, he or she (the Religious man or woman) intends, by the profession of the evangelical counsels in the Church, to free himself (herself) from those obstacles, which might draw him or her away from the fervor of charity and the perfection of divine worship. By his or her profession of the evangelical counsels, then, he or she is more intimately consecrated to divine service.”

In other words, the Religious through their vows are set free from all hindrances and attachments that may obstruct their call to holiness. There is an intense and total dedication to serving God and humanity at play here. I must quickly clarify that this does not make the Religious a better person than the rest of the laity.

Now, my question to you, the reader. In the Religious men and women you come across, do you think they are serving God and humanity more intimately than you? If the answer is affirmative, thanks be to God; but if negative, the Religious have a lot to do.

The rest of the Christ faithful have arisen and known their place in the Church. The laity is doing amazing things trying to bring the Good News wherever they find themselves (Apostolicam Actuositatem # 2-6). And yes! That is their place. The laity is not usurping what belongs to the clerics or the Religious. They are doing what their baptismal call invites them to do.

I conclude by stating that though the laity are awake and have taken up their Christian mandate, we still need the Religious more than we have ever needed them. Lumen Gentium # 44 states why the Religious Life is needed. The Council Fathers explained that Religious Life “appears as a sign which can and ought to attract all the members of the Church to an effective and prompt fulfillment of the duties of their Christian vocation.

The people of God have no lasting city here below, but look forward to one that is to come. Since this is so, the religious state, whose purpose is to free its members from earthly cares, more fully manifests to all believers the presence of heavenly goods already possessed here below.”

In other words, we need the Religious to challenge our materialistic and consumerist world today that, all things are passing and we should hold fast to the things that eternally endure. The Religious through their life of detachment are therefore called to be witnesses to the Transcendent and the life that awaits us. May God bless our Church that we would each find our calling and our place

Share this
TAGChrist Christian vocation
Previous Post5th anniversary of Living With Christ Missalette marked in Accra Next PostBook launch: "Mary in the life of today's youth" to be unveiled December 8