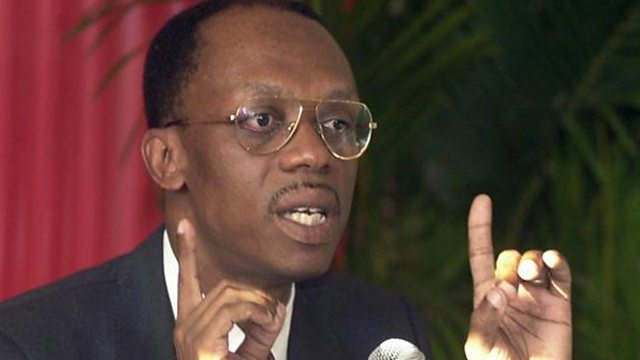 It is common to come across individuals who lay down  their profession or dreams in pursuit of something in the interest of society. In Ghana, Dr. Kwame Nkrumah is the man everybody mentions when the subject of independence and democracy comes up.

In Haiti, a Catholic priest known as  Jean-Bertrand Aristide left everything including the priesthood in pursuit of a national dream. Thus, the institutionalisation of democracy.

Here is all you need to know about the Catholic Priest who become Haiti’s first democratically elected president.

Jean-Bertrand Aristide, born July 15, 1953, Port Salut, Haiti, Haitian politician and Roman Catholic priest of the Salesian order, who was a vocal champion of the poor and disenfranchised. He was president of the country in 1991, 1994–96, and 2001–04.

Aristide attended a school in Port-au-Prince run by the Roman Catholic Salesian order, and in 1966 he moved to the Salesian seminary at Cap-Haitien and began to prepare for the priesthood. In 1975 he first aligned himself with the poor and Ti Legliz (“Little Church”), a movement that sprang from liberation theology.

The following year he returned to Port-au-Prince to study psychology (B.A., 1979) at the state university. The late 1970s was a time of increasing militancy against the brutal regime of Jean-Claude Duvalier, and Aristide, who was responsible for programming at Radio Cacique (the Roman Catholic radio station), urged change.

He often found himself at odds with his superiors, who encouraged him to leave the country. Aristide spent most of the next six years studying biblical theology abroad, earning a master’s degree in 1985 at the University of Montreal in Quebec, Canada. In 1982 he visited Haiti briefly for his ordination.

Aristide returned to Haiti in 1985, eventually becoming parish priest at St. Jean Bosco, a centre of resistance in Port-au-Prince. In 1986, the year Duvalier was driven from power, Aristide survived the first of many assassination attempts, was cautioned about his outspoken political views by the Salesians, and founded the orphanage Lafanmi Selavi and others. During the next several years he continued to anger the church hierarchy and the military.

An attempt in 1987 to transfer him to a less central parish failed when his supporters occupied Port-au-Prince’s cathedral and staged a hunger strike. An attack on a 1988 Mass he was celebrating left 13 people dead and more than 70 injured. Objecting to his political activities, the Salesians expelled him in late 1988; in 1994 Aristide formally requested that he be relieved of his priestly duties.

Encouraged to run for president by the mass movement known as the Lavalas (which means “flood” or “torrent” in Creole), Aristide in 1990 won Haiti’s first free democratic election and was inaugurated on February 7, 1991.

As president he initiated a literacy program, dismantled the repressive system of rural section chiefs, and oversaw a drastic reduction in human rights violations. His reforms, however, angered the military and Haiti’s elite, and on September 30, 1991, Aristide was ousted in a coup. He lived in exile until October 15, 1994, when the military, faced with a U.S. invasion, agreed to let Aristide return to power. He resumed the presidency, and, although he remained popular with the masses, he was unable to find effective solutions to the country’s economic problems and social inequalities. Barred constitutionally from seeking a consecutive term, he stepped down as president in 1996.

In 1997 Aristide formed a new political party, the Lavalas Family, and in 2000 he was again elected president. Although the opposition boycotted the election and charges of electoral fraud led to international calls for new or runoff elections, the results were declared official, and Aristide was inaugurated in February 2001.

A coup against Aristide failed in July 2001, but during the next several years opposition to his rule increased. He fled the country in February 2004 amid anti-government protests that had turned into a full-scale rebellion. Despite efforts by the United States to ensure that he remain in South Africa where he had been living in exile he returned to the country several days prior to the presidential runoff elections of March 2011.