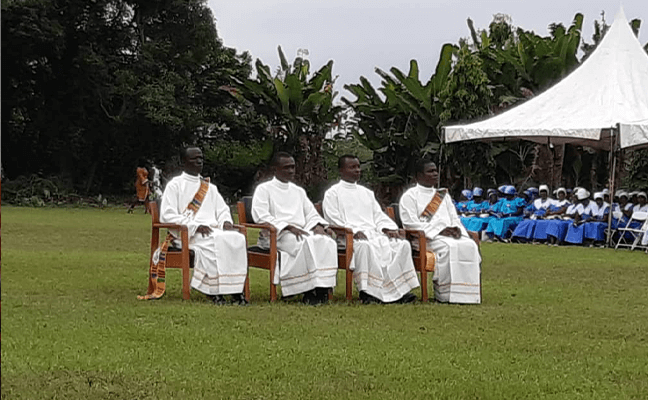 The Metropolitan Archbishop of Accra, His Grace Most Reverend John Bonaventure Kwofie, Cssp on Saturday, August 3, 2019 joined other Catholic faithfuls for the 2019  ordination for the congregation of the Holy Spirit.

The ceremony which took place at the Spiritan University  in Ejisu in the Kumasi Archdiocese was graced by a host of Spiritan Priests and Brothers, Priests from the Missionaries of Africa, Sisters from different congregations, Spiritan lay associates, Seminarians and  parishioners among others.

After the presentation of the candidates, the Archbishop, in his homily, instructed that by the Sacrament of the Holy Orders, the ordinands would be configured and empowered to take up the task of service for Christ and His people. However, he clarified that the task of evangelisation and service is not the prerogative of the ordained alone; all Christian people, by the virtue of their baptism, have received the divine mandate to go and preach the message of salvation (cf. Matt. 28:20).

But the ordained, by the virtue of their ordination, have been given an exceptional privilege of becoming special emissaries of the good news.

He added that when there is adequate evangelisation, the Church is rejuvenated. The Archbishop, nonetheless, did not fail to point out that proclaiming the Word of God will demand a lot from those who proclaim it. To this end, he admonished the ordinands to constantly seek direction and empowerment from the Master of the Vineyard.

Share this
TAGSociety of the Holy Spirit Spiritan University
Previous PostArchbishop Kalenga eulogised for his service to the Church in Ghana Next PostTrue wealth is found in Jesus Christ, not money - Pope Francis