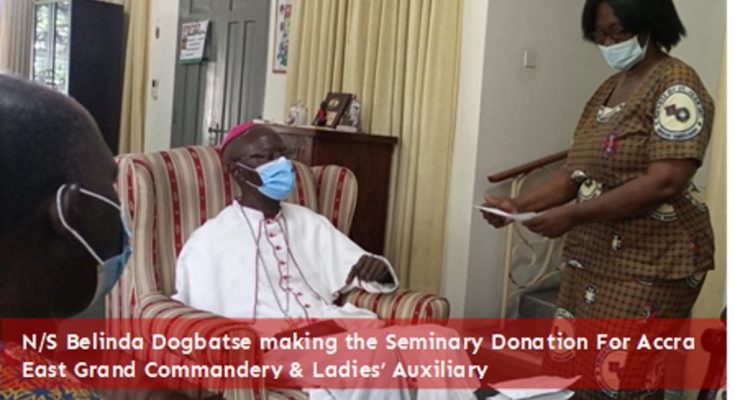 Like
Post Views: 697
The Accra West Grand & Accra East Grand Commanderies & Ladies’ Auxiliary of The Knights Of St. John International visited the Metropolitan Archbishop Of Accra, Most Rev. John Bonaventure Kwofie CSSp on Tuesday 17th August 2021.
The visit was at his office at the Holy Spirit Cathedral, Castle Road, Adabraka. The visiting team comprised of a team from the West and a team from the East as follows:
Brig. Gen. Edward Kofi Dabi – AWGC Grand President
Col. Conrad A. Nyuur – AWGC Grand Secretary
N/S Aisha Cecelia Armah – AWGLA 1st Vice President
N/S Angela Tettey – AWGLA Grand Secretary
Brig. Gen. Emmanuel Plange – AEGC Grand President
Col. Dominic Kweku Darkwa – AEGC Grand Secretary
N/S Belinda Dogbatse – AEGLA – Grand President
N/S Mariska Taylor-Darko – AEGLA Grand Secretary.
Brig. Gen. Bekoe Palmer-Buckle – Past Grand President – AEGC
The meeting offered the opportunity to introduce the Officers Of Both Grands to the Archbishop and also offered our condolences to him on the loss of his mother, whose funeral is scheduled for the 27th August 2021 at Apowa in the Western Region.
A Cash donation was made to the Archbishop to support the funeral of his mother.
It was also mentioned that the Accra West Grand Commandery & Ladies’ Auxiliary was undertaking a Building Project at the St. Paul’s Seminary as their contribution towards the development of the Seminary.
Accra East Grand also made a second donation to the Archbishop towards the support of Seminarians.
The Archbishop thanked the visiting team for their kind gesture and also spoke briefly about the impact of his mother in the lives of himself and his siblings.