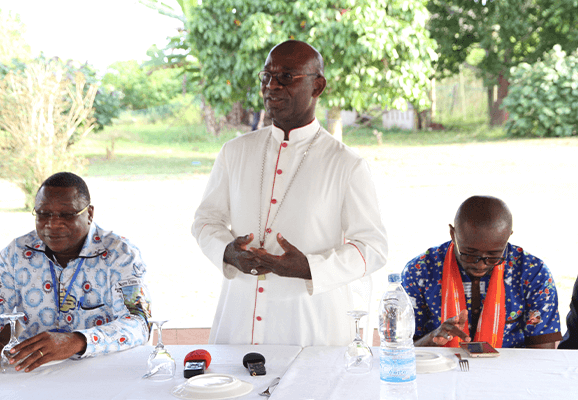 The Bishop of Grand-Bassam in La Côte d’Ivoire, Raymond Ahoua, has urged African Catholic Journalists to use the media to propagate the good and positive stories and happenings of the Church in Africa and the Continent as a whole to the world.

According to him African stories must be told positively through the use of all means of Communication. He said August 15 when about 50 Catholic Journalists from Benin, Burkina Faso, La Cote d’Ivoire, Ghana, Togo, Mali, and Senegal, paid a courtesy call on him at his residence at Grand-Bassam.

The African journalists were in Abidjan for week-long Refresher programme from 8-16 August on the theme: The Electoral Processes in Africa, the Role and Responsibility of the Media in Preserving Social Peace.

It was organised by the Burkina Faso Chapter of the Union of African Catholic Press (UCAP) in collaboration with the Ivorian Association of Journalists and Communicators (AIJCCa).

Bishop Ahoua, who is also the President of the Ivorian Episcopal Commission for the Media, was saddened that many prominent media houses around the world seemed to focus more on negative stories in Africa while many good positive initiatives by the Church and other Religious Institutions go unreported.

He thanked Catholic Journalists on the continent for their commitment and dedication in serving the Church, averring that the Church needs the media to promote the Word of God to people in all parts of the continent.  He said in sharing knowledge on happenings in the Church in Africa, Catholic journalists must first see themselves as Catholics in their places of work either in the Church or circular Media.

In a Message to the participants, the Prefect of the Vatican Dicastery for Communication, Dr. Paolo Ruffini, praised the dynamism of Catholic communicators in promoting a “journalism of peace”.

He recalls Pope Francis’ Message for the 52nd World Day of Social Communications last year, on the theme “The truth will set you free: fake news and journalism for peace”.

In that message, the Pope speaks of “a journalism created by people for people, one that is at the service of all, especially those who have no voice. A journalism less concentrated on breaking news than on exploring the underlying causes of conflicts, in order to promote deeper understanding and contribute to their resolution by setting in place virtuous processes. A journalism committed to pointing out alternatives to the escalation of shouting matches and verbal violence”.

On behalf of the President of UCAP-Africa, Mr. George Sunguh, Mrs. Victoria Lugey, 2nd Vice President  of UCAP-Africa, commended the organisers for the programme and called for more of such activities across the continent to keep journalist Associations awake. She also encouraged national Associations to come out with programmes that would enhance the capacity of their members.

The President of UCAP-Burkina, Mr. Alexander Le Grand Rouamba, who also chaired the Organising Committee, said the programme brought together Catholic journalists and communicators to look into the deviations and the instrumentality of the media and their leaders.

He said it also firmly committed journalists not to be vectors of division and tension. The theme of the Programme, he noted, challenges countries in the sub-region, such as La Côte d’Ivoire, Burkina Faso, Togo and Ghana, which would be going to the polls in 2020.

Fr. Blaise Bobi-Attachie, the Vice President of the Catholic Association of Media Practitioners, Ghana (CAMP-G), called on Catholic journalists not to allow politicians to use them for their political ambitions and parochial interests.

He asked them to be the voice of the voiceless as well as fight for the cause of children and vulnerable in society, entreating them to strive to draw attention to people about the afflicted. 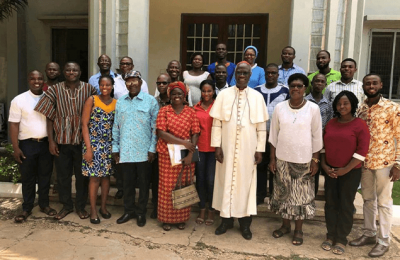 Catholic Media Practitioners to deliberate on election and peace in Africa