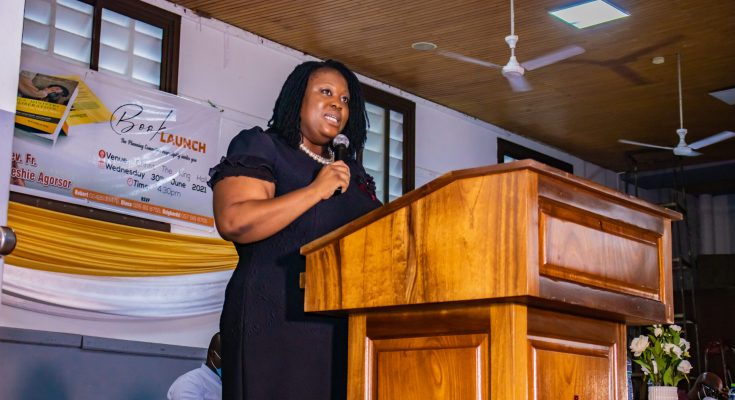 The Deputy Attorney General (AG) of the West African country of Ghana, Diana Asonaba Dapaah has said that the idea of the extraordinary mercy of God and its impact in our daily lives as Christians “can never be overstated.”

“It ought to be in our minds’ eye, a relevant consideration for how we as Christians relate with each other and even with those not of our faith,” she said at the launch of a new book titled “Jesus’ Ministry of Liberation; A Companion after the Year of Mercy” at the Christ the King Parish Hall in Accra on June 30.

According to the Deputy AG, who doubles as the Deputy Minister for Justice, God’s mercy ought to be “a relevant consideration for how we as Christians relate with each other and even with those not of our faith”.

Quoting Pope Francis in ‘Misericordiae Vultus’, Madam Asonaba Dapaah said that Jesus is the face of God’s mercy and that mercy is not abstract but something that quite literally changes us from the inside out.

Admittedly, she said, books on the topic of God’s divine mercy abound, but “this one is exceptional; practical in examples and simple in language to all Christians especially the nascent Christian.”

“This book is written in a way that makes for a deeper appreciation and understanding of God’s mercy. It makes us understand that beyond the mere concept lies more,” she said, adding, “The world today witnesses increasing levels of violence, fear and hatred. Everyday situations and circumstances put us to variable tests in unfathomable ways.”

The book was authored by Rev. Fr. Aaron Agbeshie Agorsor, a Priest of the Accra Archdiocese and seeks to present another dimension of the Year of Mercy namely “Mercy Liberates”, while inspiring hope in the youth who are in despair.

The Deputy AG also hinted that prior to becoming a Catholic, she was skeptical of “the reverence given to our Holy Mother Mary, however, she came to acknowledge and appreciate the status of our Holy Mother in Catholicism” by virtue of Father Agorsor’s maiden book, “Mary’s Magnificat: A Perfect Model of Faith Expression”.

She further commended Fr. Aaron Agorsor’s vision and efforts to comprehensively put together his second book which touches a range of other topics like, ministry and the kinds of ministers there are, the treatment of the vulnerable in society, compassion, just to mention a few.

Looking forward, the Deputy Minister prayed that “God makes this book an adequate complement of the word, a lighthouse for the wandering Christian, a repository for the searching Christian and a companion for the lonely.”

While paying glowing tributes to Fr. Agorsor for his impact in the lives of both Christians and non- Christians, the Deputy Minister for Justice revealed that Fr. Agorsor was the priest who baptised her and gave her first communion on March 29, 2014 and influenced her life as a Catholic.

Present at the book launch were Monsignor John Louis, the Vicar General of the Archdiocese of Accra; Rev. Fr. Ebenezer Akesseh, the Parish Priest of Christ the King Parish, and other Priests and religious.