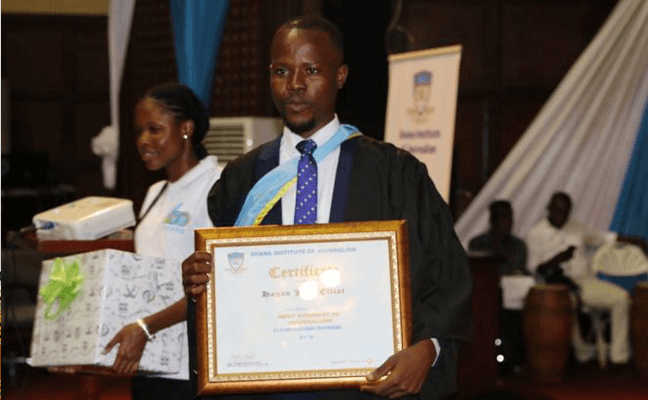 From a newsroom cleaner to best journalism student: Story of a Sacred Heart Parishioner

If you work as a newspaper journalist, one of the people you would least expect to read your full-page feature story and give you feedback is the newsroom cleaner. The general assumption is that Ghanaians don’t like reading, so news stories are often summarised as brief as possible to fit a few paragraphs.

But this story was more than 2000 words long. In fact, the length is the reason it did not make it onto the front page of the newspaper that morning. The editor had suggested that I write it in a “story” format so it could be used as a front-page story, but I insisted I wanted to tell a full story in a creative way. The inverted pyramid format I was taught in journalism school is boring and stifles the creativity of journalists, especially those of us who want to write.

So this award-winning story was eventually buried in the features page of the newspaper, but that did not stop the cleaner from reading every word of it.

“Manasseh, I really enjoyed reading your story. I could not stop reading until I finished,” John Elliot Hagan later told me how he began his day in the office when he arrived that dawn.

John was a cleaner at The Finder newspaper. When Mohammed Ibrahim Awal left the Graphic Communications Group as its Managing Director and set up The Finder, he assembled a group of young and enterprising reporters. And I was happy to be in this team.

I had just finished my national service and refused full-time employment as the public relations officer for the company where I served. I didn’t think I was cut for that public relations, even though they thought otherwise. Journalism was all I wanted to do and the prospect of writing for a newspaper that would not be controlled by the government and which promised to depart from the “he said, she said” kind of reporting, gladdened my heart.

The Finder provided an opportunity to meet other young, ambitious people like John Elliot Hagan, who had the potentials to rise but needed a push, a platform, and a launchpad. After a few months, however, I had to resign when the vision did not appear to align with my personal principles.

When I picked a copy of The Finder two years later and saw John Elliot Hagan’s byline, was amused. Had The Finder ran out of reporters? And had it got so serious that cleaners were now sent to cover assignments?

If I still had any doubts about the young man’s potential, after seeing John’s stories and meeting him at programmes, those doubts were cleared last night when I saw Facebook photos of John Elliot Hagan’s graduation from the Ghana Institute of Journalism. He graduated with first-class honours in journalism. That was not all.

A cleaner in a newsroom who suddenly sees his bylines in the newspaper might have been content with the elevation and the benefits that come with it. But John went back to school, combining work with education.

“At certain times, I tried to play smart by nibbling on snacks throughout lectures just to stay awake, but even with that, I was caught ‘off guard’ a few times,” John wrote about his struggle in a Facebook post.

His struggle was real. The path was unclear. But he persevered. And conquered the gloom.

John dropped out of St. Thomas Aquinas Senior High School in June 2002. He was a second-year General Arts Student, but he could no longer fund his education and there was no helper.

His father had died, and his mother was struggling to barely take care of the four boys. Family members had given some hope, but it was a hopeless hope. John, the eldest, says he decided to sacrifice his education for his siblings.

In 2004, he got a job with a cleaning company and he was assigned to the Graphic Communications Group. At Graphic, John went beyond the cleaning. His hard work endeared him to the reporters, old and young. He would stay on after work and run errands for them. They sent him to buy food and anything he could do.

In 2007, a woman who worked in Graphic (now a judge who wants to remain anonymous) struck a conversation with John after he had cleaned her office for some time. She asked him what he wanted to do with his life and John narrated how his hopes had been truncated. This kind woman, according to John, said she saw great potential in him and wanted him to go back to school.

John was now 22 years old. Going back to the mainstream senior high school was a bit problematic so he enrolled at the Accra Technical Training Centre (ATTC) to study electrical engineering, between 2007 and 2011. For the first three years, it was a part-time job so he was working alongside the school. The benevolent woman paid his fees.

In 2011, one of John’s friends at Graphic, Maurice Quansah, hinted him about a vacancy at The Finder newspaper. The newspaper was looking for an office assistant and the key quality was someone the company could trust. When John went to see Mr. Kwadwo Larbi, the first editor of The Finder, he was told that Maurice Quansah had spoken so well of him that he didn’t have anything to prove.

With time, he took on additional responsibility for cleaning when the cleaner stopped work without any notice.

His transition from being a cleaner/office assistant to a reporter began in 2013 when, on his way to work one morning, John saw a dead body at Asylum Down. That dead body resurrected John’s hope and he dreamed beyond office cleaning and assisting the editorial team.

When he got to the office, decided to write the report himself. He had spent his spare time at the Daily Graphic and The Finder reading so many reports that filing one came effortlessly. The editor at the time, the late George Koomson, was so impressed with his report that he encouraged him to write more. The editor thought the cleaner report in a way some reporters could not. With time, whenever there was an assignment and the reporters were too busy, he would be asked to go and cover. His output impressed his editors and he was assigned to cover weekend assignments.

In 2015, Elvis Darko, the editor of the paper to whom John says he owes a lot of gratitude, said he was too good to be a substitute. That was when he was made a full-time reporter. And he played in the newsroom’s first eleven with ease and excellence.

It is one thing learning on the job, and another thing understanding the theories and the academic intricacies that come with the job. John wanted to study journalism. Fortunately, GIJ had introduced a diploma programme for mature students so John took the advantage.

The publisher of The Finder, now minister of state for Business Development, Mohammed Ibrahim Awal, sponsored him to go to school. After two years, John decided to enroll for a top-up degree programme.

It was a happy ending to an inspiring story last Saturday.

John Elliot Hagan says his success is hinged on the kindness of people who came his way. He wants to make them proud and give them a reason to believe in others like him and support them when they can.

He is back to The Finder, where the major transition began, and is looking forward to life’s menu. But he already has his eyes on a master’s degree. It is unclear how he would fund that and what the future portends for his current state.

But he is optimistic that the powerful hand of Providence, which has brought him this far, would continue to hold and direct his path and use him as a reason one should not give up when one is stuck in a quagmire of hopelessness and appears to have all the odds against them. 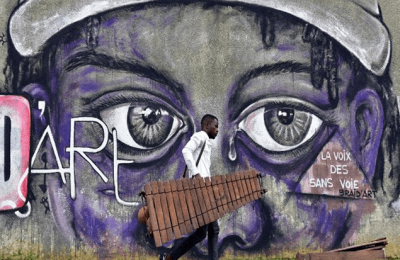