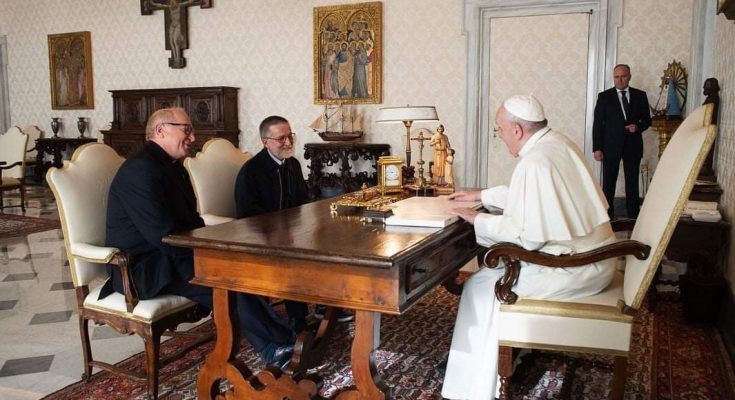 November 9, 2020 – Pope Francis met with Fr. Pierluigi Maccalli, SMA, an Italian missionary priest who was abducted from his parish in Niger in 2018 and, along with three other hostages, was liberated last month by jihadist insurgents with the help of the mediation of the government of Mali.

The 59-year-old priest was welcomed by Pope Francis in the Vatican by shaking and kissing his hand, a gesture that surprised him. Fr. Maccalli described his meeting with the Holy Father as “very, very beautiful”. “I was moved, most of all, telling the pope about what I lived through and then entrusting to his prayer, above all, the communities I went to and which have now been without a missionary presence and a priest for more than two years,” he told Vatican News.

According to the SMA priest, he also expressed his gratitude to the Pope and the whole of the Church for the prayers to which the Pope conveyed that “the Church had supported him, but he had supported the Church”, Catholic News Agency reported.

Fr. Antonio Porcellato, the Superior-General of the SMA Congregation, also expressed thanks for the prayers and efforts for his release. “We continue to pray for the other people who are still in the hands of the kidnappers and for justice and reconciliation in the Sahel countries”, he said.