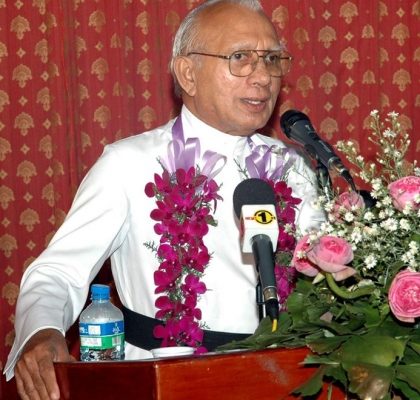 Rev. Fr. Poruthota was born in 1931 and ordained in February 1957 at St. Lucia’s Cathedral in Kotahena, in Colombo.

In the 1960s the young seminarian Ernest Poruthota developed an interest in cinema in seeing films about the Catholic Church. Soon, Poruthota started to defend indigenous cinema. He wrote in 1965 a book on aesthetics in cinema and founded three years later the Film Critics and Journalists Association (FCJAC).

In 1972, Rev. Fr. Ernest Poruthota was put in charge of media affairs of the Church. The media involvement started to take root in Sri Lanka. For the first time, in 1973 a tea party was organized by Fr. Poruthota, under the guidance of Cardinal Cooray, for Sri Lankan artists.

The discussion that ensued lead to the advent of the International Catholic Organization for Cinema and Audiovisual (OCIC) in Sri Lanka. In 1974, a Sri Lankan cinematic work was felicitated with an international award for the first time by the OCIC. This lead to a renaissance in Sri Lankan cinema. Without stopping short of appreciating local talent, the Church took it upon itself to provide such artists with film training courses.

At the OCIC centre, Poruthota organized a weekly film screening and held regular workshops for new filmmakers along with Sri Lanka’s veteran cinematographer Andrew Jayamanne, who started his education in cinema there.

OCIC played a significant role in developing the Sri Lankan film industry. OCIC film training courses laid the foundation for many veterans in the field. Fr Poruthota was able to bring down Belgian, German, Italian and French films of international repute to Sri Lanka and make them available for public viewing through various embassies, facilitated by OCIC. This facilitated a dialogue about such films among personalities in the Sri Lankan film industry and was a rare opportunity not afforded to many other countries at the time.

A journalist once called Poruthota a “rebel in a cassock”. Recently, Poruthota still claimed to be against any censorship because he always believed in the freedom for the artist: “There should be no censorship. Not by the government, not by the Church.”

Rev.Fr. Ernest Poruthota passed away on June 16, at the age of 88 years.