Home Ghana News Saint of the day: The first Martyrs of the church of Rome 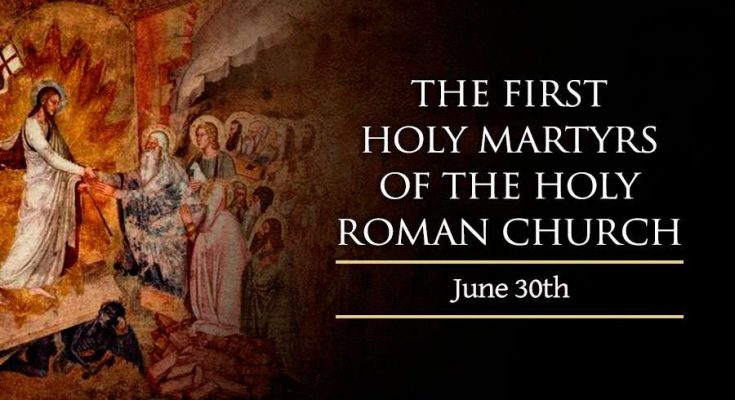 Saint of the day: The first Martyrs of the church of Rome

There were Christians in Rome within a dozen or so years after the death of Jesus, though they were not the converts of the “Apostle of the Gentiles” (Romans 15:20). Paul had not yet visited them at the time he wrote his great letter in 57-58 A.D.

There was a large Jewish population in Rome and as a result of this, and other controversies between Jews and Jewish Christians, Emperor Claudius expelled all Jews from Rome between the year 49-50 A.D. Suetonius the historian says that the expulsion was due to disturbances in the city “caused by a certain Chrestus”, that is Christ. Perhaps many came back after Claudius’ death in the year 54 A.D. Paul’s letter was addressed to a Church with members from Jewish and Gentile backgrounds.

Then in July 64 A.D., more than half of Rome was destroyed by fire. Rumor blamed the tragedy on Emperor Nero, who wanted to enlarge his palace. He shifted the blame by accusing the Christians. According to the historian Tacitus, many Christians were put to death because of their “hatred of the human race.”

Threatened by an army revolt and condemned to death by the senate, Emperor Nero committed suicide in the year 68 A.D. at the age of only 31.

These Christian deaths were game to the Romans. They were tied to sticks in the arena and the lions released on them. Some were set ablaze alive. They bravely faced their deaths with joy.

Blood is not only thicker, but it also speaks loudest. The blood of martyrs has always been, and will always be, the seed of Christians because they shared in the suffering of Christ. Do not close your eyes and ears to the faith.

No one can fight for your salvation but yourself. Let those around you testify to Christ because you were Christ-like. May we also be the first to lead a soul to heaven. Amen

Happy feast day to us all. Holy martyrs, pray for us.