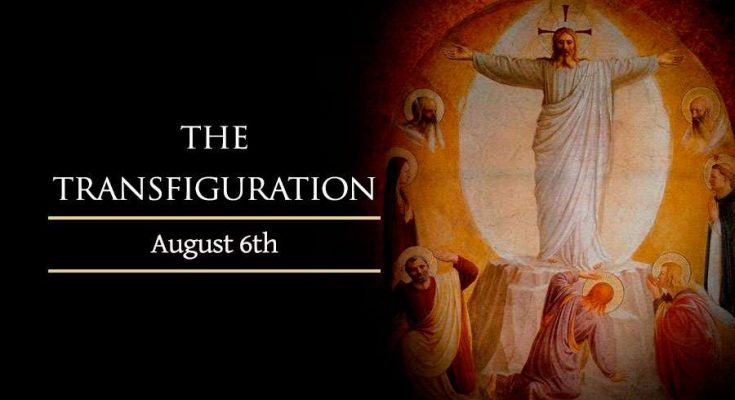 Feast of the Transfiguration

While Jesus was in Galilee, about a year before His Passion, He manifested His glory to three of His most beloved Disciples , the same who were afterward witnesses of His Agony in the Garden, Peter and the two sons of Zebedee, James and John. He led them to the summit of Mount Tabor, as it is generally believed. This mountain, situated in Galilee, best answeres the description of the Evangelists.

The face of the Divine Saviour became resplendent as the Sun and His garments, white as snow. Moses and Elijah appeared at His side and conversed with Him on the death He was to suffer at Jerusalem. Peter, in admiration, exclaimed, “Lord, it is good for us to be here”! He then proposed to erect three tents, one for the Saviour, another for Moses and the third for Elijah.

While he was still speaking, a luminous cloud envelope them and a voice was heard proceeding from it saying “this is My beloved Son in Whom I am well pleased, listen to Him”. The three Apostles fell prostrate but Jesus touched them and commanded them to rise.

It was fitting that those who so soon should behold Jesus in the depths of the humiliation to which His sacred Humanity was to be subjected in Gethsemane should catch a glimpse of that glorified Humanity and His Divinity, that they might be strengthened against temptation.

May today’s feast touch our Hearts to simply believe in Jesus our Lord and Saviour. Amen

Happy feast day to us all. Jesus our Saviour, have mercy on us. Amen