Home Ghana News Feast of The Immaculate Heart of Mary 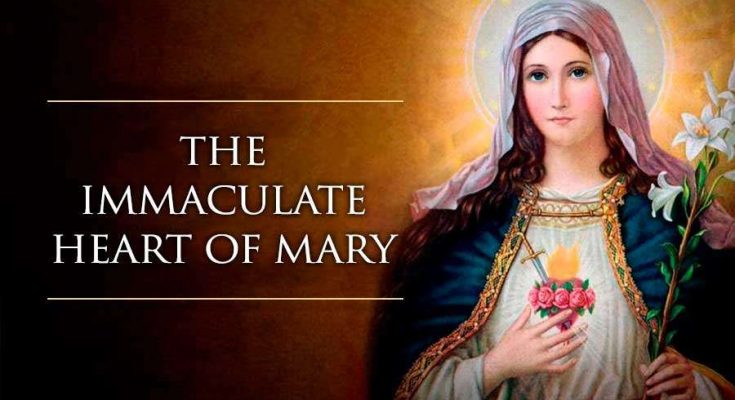 Feast of The Immaculate Heart of Mary

In the Gospel of Luke chapter 2, the evangelist twice reports that Mary kept all things in her heart, there she might ponder over them. Luke 2:35 recounts the prophecy of Simeon that her heart would be pierced with a sword. And this image is the most popular representation of the Immaculate Heart of Mary.

St. Leo said that through faith and love she conceived her son spiritually, even before receiving him into her womb, and St. Augustine says she was more blessed in having borne Christ in her heart than in having conceived him in the flesh.

Devotion to the Heart of Mary began in the Middle Ages with St Anselm of Canterbury, and St Bernard of Clairvaux. It was practiced and developed by Sts. Mechtilde, Gertrude the Great, and Bridget of Sweden. It is also seen in the pious meditations in the Ave Maria and the Salve Regina usually attributed either to St. Anselm of Lucca or St. Bernard.

St. Bernardine of Siena is sometimes called “Doctor of the Heart of Mary” and from him, the Church has borrowed the lessons of the second nocturn for the feast of the Heart of Mary. St Francis de Sales speaks of the perfections of this Heart, the model of love for God, and dedicated his “Theotimus” to it. In the second half of the sixteenth century and the first half of the seventeenth, ascetic authors dwelt upon this devotion at greater length.

It was, however, St. John Eudes who propagated the devotion to make it public and to have a feast celebrated in honor of the Heart of Mary, first at Autun in 1648 and afterward in a number of French dioceses. He established several religious societies interested in upholding and promoting the devotion, of which his large book on the Coeur Admirable (Admirable Heart), published in 1681, resembles a summary.

St. Jean Eudes’ efforts to secure the approval of an office and feast failed at Rome, but notwithstanding, the devotion to the Heart of Mary progressed. Eudes began his devotional teachings with the Heart of Mary and then extended it to the Sacred Heart of Jesus. However, it was only in 1805 that Pope Pius VII allowed a feast to honor the Immaculate Heart of Mary.

In 1699, Fr Pinamonti published a short work on the Holy Heart of Mary in Italian, and in 1725, Joseph de Gallifet combined the cause of the Heart of Mary with that of the Heart of Jesus in order to obtain Rome’s approval of the two devotions and the institution of the two feasts. But in 1729, his project was defeated, and in 1765, the two causes were separated, to assure the success of the principal one.

Two factors that helped the rapid progress of the devotion were the introduction of the Miraculous Medal by St Catherine Laboure in 1830 and the establishment at Notre-Dame-des-Victoires, Paris of the Archconfraternity of the Immaculate Heart of Mary, Refuge of Sinners.

More than four million Miraculous Medals were distributed throughout the world within four years and in 1838, Fr Desgenettes, the pastor of Notre-Dame-des-Victoires, organized the Association in honor of the Holy and Immaculate Heart of Mary, which Pope Gregory XVI made a confraternity the same year. In July 1855, the Congregation of Rites approved the Office and Mass for the Immaculate Heart.

This feast is identical with the feast of the “Inner Life of Mary”, celebrated by the Sulpicians on 19 October. It commemorates the joys and sorrows of the Mother of God, her virtues and perfections, her love for God and her Divine Son, and her compassionate love for mankind.

In 1969, Pope Paul VI moved the celebration of the Immaculate Heart of Mary to the Saturday, immediately after the Solemnity of the Sacred Heart of Jesus.

Happy feast day to us all.

Feast of The Most Sacred Heart of Jesus

Share this
TAGImmaculate Heart of Mary Saint of the day
Previous PostFr. Poruthota, Founding Director of OCIC Sri Lanka, passes away Next PostDiscussion on setting up national Catholic television channel kicks off

One thought on “Feast of The Immaculate Heart of Mary ”