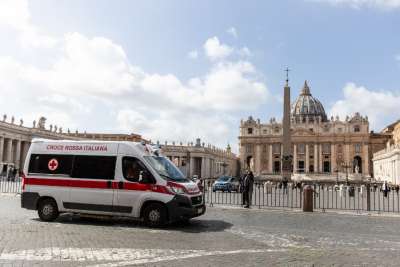 Diocese of Rome cancels all public Masses, announces day of fasting and prayer

The Diocese of Rome has canceled all public Masses until April 3 in response to the coronavirus outbreak. The announcement by the vicar general of the diocese, published Sunday evening, follows a decree by the Italian government suspending all public religious ceremonies.

“The Church of Rome … assumes an attitude of full responsibility towards the community in the awareness that protection from contagion requires even drastic measures, especially in interpersonal contact. Therefore, until the same date of April 3, the communal liturgical celebrations are suspended,” Cardinal Angelo De Donatis, vicar general of Rome, said in a statement March 8.

“The season of Lent helps us to live this great trial evangelically. I bless you by entrusting you all to Our Lady of Divine Love,” the vicar general said.

Priests living in Rome and Vatican City can continue to offer Mass in private. Parishes in Rome will remain open for personal prayer before the tabernacle, the diocese said.

The announcement by the Rome diocese mirrors national action adopted by the Italian bishops’ conference.

The conference also issued a statement March 8 explaining that the Italian government’s decree “suspends civil and religious ceremonies, including funeral ceremonies, throughout the country until Friday, 3 April.”

“The interpretation provided by the government strictly includes the Holy Masses and the funeral rites among the ‘religious ceremonies.’ It is a highly restrictive passage, the reception of which coincides with suffering and difficulty among the pastors, priests and faithful,“ the bishops said.

“The acceptance of the decree is mediated solely by the desire to do its part, also in this situation, to contribute to the protection of public health,” the conference stated.

The video broadcast will “allow those who wish to follow the celebrations united in prayer with the Bishop of Rome,” Holy See Press Office Director Matteo Bruni said Sunday.

Eighty-four cases of coronavirus have been documented in Lazio, the region surrounding Rome, as of March 8. In Italy, 7,375 people have contracted the virus, and 366 people have died, according to the Ministry of Health.

The Diocese of Rome has called on all Catholics in Rome to observe a day of fasting and prayer for the victims of coronavirus on March 11, and invited people to tune into a special televised Mass.

“I heard the cry of our city, of Italy and of the world, at this particular moment we are experiencing. It is a situation we are not used to, that worries us, but above all we are now called to live with the strength of faith, the certainty of hope, the joy of charity,” Cardinal Donatis, the vicar general of the Diocese of Rome, wrote in a letter March 6.

“In addition to fasting … we want to be close, with a sign of almsgiving by collecting offerings that we will donate in support of the health personnel who are spending generously and sacrifice in the care of the sick,” he said.

Daily Masses were canceled earlier this week in Milan, Venice, Bologna, and other northern Italian regions, where the majority of Covid-19 cases have occurred.

The Italian government imposed a strict quarantine on March 8 for northern and central regions of Italy, including Milan and Venice.

The Vatican confirmed on March 8 that there has only been one positive diagnosis of Covid-19 within Vatican City — a person who tested positive on March 5 during a pre-employment medical examination in the Vatican Health and Hygiene clinic.

Five people who were in close contact with this person are in a precautionary quarantine, according to the Holy See Press Office. The Vatican Museums are closed until April 3.

Pope Francis prayed for those suffering from the coronavirus epidemic during his Angelus address in a video streamed live to St. Peter’s Square March 8.

“I am close in prayer to people suffering from the current coronavirus epidemic, and to all those who are caring for them,” he said.

“I join my brother bishops in encouraging the faithful to live this difficult moment with the strength of faith, the certainty of hope and the fervor of charity,” Pope Francis said.