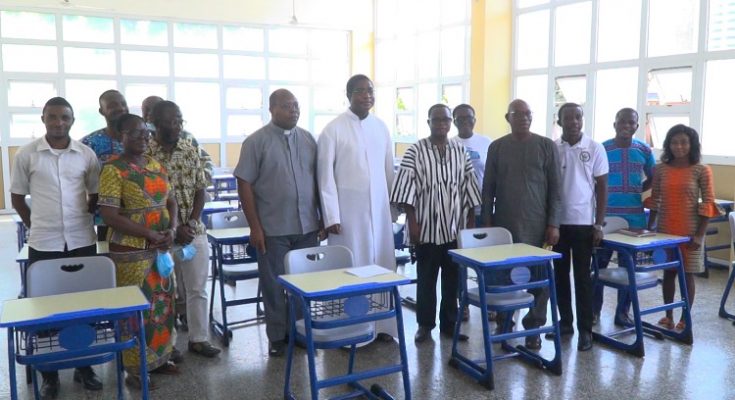 The Catholic Institute of Business and Technology (CIBT), Adabraka, Accra received three hundred (300) modern classroom desks (tables and chairs) from the Catholic Archdiocese of Accra recently as a fulfillment of a promise made to the Immediate SRC President, Eric Boakye-Mensah and his Colleagues.

Very Rev. Fr. John K. Louis, the Vicar General of the Catholic Archdiocese of Accra and the former Academic Dean of CIBT presented the new furniture on behalf of the Chancellor of CIBT Most Rev. John Bonaventure Kwofie, CSSp, to the president of the institute, Prof. Sylvester Achio.

The president of CIBT Prof. Sylvester Achio while receiving the presentation stated that this initiative will help solve some challenges the school faces. He promised that the furniture presented to the school will be used judiciously to help students of CIBT improve academically. He further appealed to individual institutions and groups to support the School financially or in-kind, especially in the area of technology.

The new 300 desks (tables and chairs) are unique and will make the students comfortable while studying even for a longer period.

Mr. Perry P.K Ofosu, the Registrar of CIBT, in an interview, said words of gratitude to the Archdiocese of Accra for coming to their aid. He also thanked the SRC President and his team for making an effort to appeal to the Archdiocese for the furniture which has been a need for the institute for some time. He urged the archdiocese to continue supporting them in every little way they can for the growth of the institution. He said CIBT provides high-quality education.

The immediate SRC president of CIBT, Eric Boakye-Mensah in an interview, said “A year ago I led a delegation with the immediate SRC to see the chancellor of CIBT, Most Rev. John Bonaventure Kwofie, CSSp, and shared with him some of the challenges confronting us as students of CIBT. The archbishop made a promise that he will fulfill some of the proposals that we laid before him. Today I am very proud and happy that this promise has been put into reality.” He thanked the Archbishop for his kind gesture on behalf of the Dean of Students affair, the immediate executives, the IMC, and the entire students of CIBT. He mentioned that this will help facilitate their academic excellence as far as education is concerned.

Share this
Previous PostSACRILEGE: Bishop Suspends Pastoral Activities at St. Peter's  Next PostSaint of the day: Our Lady of Sorrows