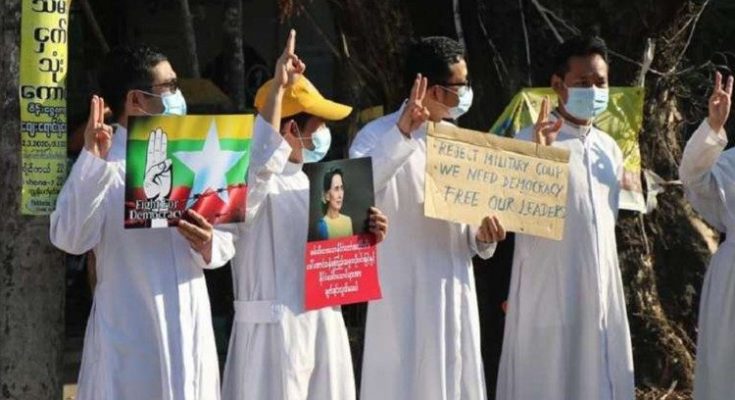 More Catholic men, women and priests are joining protests across Myanmar against the military coup a fortnight ago, calling for the release of their elected leader Aung San Suu Kyi and other members of the government and the restoration of democracy.

Hundreds of Catholics marched on the streets of the country’s main city Yangon on Sunday and recited prayers and the rosary, UCANEWS reported. Young people held placards reading “Free Aung San Suu Kyi” and “We support CDM,” meaning the civil disobedience movement. Nuns from various congregations have shown solidarity with the people of Myanmar by marching on the streets, saying prayers at convents and offering snacks to protesters in Yangon and elsewhere.

In the northernmost state of Kachin, a Christian stronghold, nuns stood at the entrance of a church compound while holding placards stating “No to dictatorship” and “Listen to the voices of people” while protesters swarmed the streets of Myitkyina, the state’s capital city, on Feb. 14.

The coup against democracy

Myanmar’s military seized power in the early hours of 1 Feb., after detaining its democratically elected leaders from the governing National League for Democracy (NLD) party, headed by Su Kyi. The coup came after days of escalating tension between the civilian government and the powerful military, which claimed that the November general election, won overwhelmingly by the NLD, was fraudulent. Since then arrests have continued unabated.

The charges against Su Kyi include possession of unregistered imported walkie-talkies used by her security staff.

Undeterred by the pandemic and defying a ban on large gatherings, thousands of people from all walks of life from religious affiliation have taken to the streets across the largely Buddhist nation since the first large-scale protest began on 6 Feb.

Faceoff
Security forces intensified their crackdown against anti-coup protesters on Monday, as thousands of engineers marched on the streets of Mandalay, chanting and holding signs that read: “Free our leader,” “Who stands with justice?” and “Stop arresting people illegally at midnight.”

Sunday night, the military shut down the internet across the nation for 8 hours, as it ramped up security in major cities.

The military junta warned protesters across the country that they could face up to 20 years in jail if they defy the armed forces. Long sentences and fines will also apply to those found to incite “hatred or contempt” towards the coup leaders, the military said. The legal changes were announced as armoured vehicles appeared on the streets of several cities.

The UN
The United Nations chief on Sunday called on the military and police to ensure that the right of peaceful assembly is “fully respected” and demonstrators are “not subjected to reprisals”. “Reports of continued violence, intimidation and harassment by security personnel are unacceptable”, said Stéphane Dujarric, the spokesman of UN Secretary-General Antonio Guterres.

The UN Special Rapporteur on the situation of human rights in Myanmar, Thomas Andrews, tweeted, “it’s as if the generals have declared war on the people of Myanmar: late night raids; mounting arrests; more rights stripped away’ another internet shutdown; military convoys entering communities”. “These are signs of desperation. Attention generals: You WILL be held accountable”, he underscored.