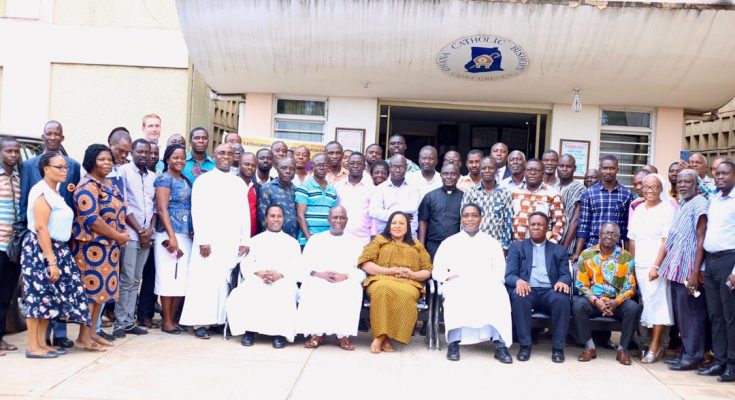 The Ghana Catholic Bishops’ Conference is determined to lead the campaign of sensitizing Ghanaians on the need for  them to go all out to vote at the upcoming December 17 National Referendum that will pave way for the election of Metropolitan, Municipal and District Chief Executives (MMDCEs).

“As we have done in the past, the Ghana Catholic Bishops’ Conference will offer its support, once again, to the Government, the Electoral Commission, the National Commission on Civic Education and other stakeholders in the efforts aimed at raising awareness and understanding of the issues at stake before, during and after the referendum so that the citizenry and Parliament can make informed choices and decisions,” the Most Rev. John Bonaventure Kwofie, Archbishop of Accra said.

He said these in a message read on his behalf by the Very Rev. Fr. John Louis, the Vicar General of Accra at the launch of the Regional and Diocesan sensitisation programme on the upcoming national referendum at the National Catholic Secretariat, Accra October 4, 2019.

The Archbishop said: “Our network of parishes and outstations across the country will continue to provide platforms and opportunities for awareness creation and discussion on the merits and demerits of the proposals. Our clergy and lay faithful are encouraged, through our structures to participate actively in the debates and discussions leading to the amendment of the two major provisions (Articles 243 (1) and 55(3) in the 1992 constitution.”

The amendment Bill of Article 243 (1) of the 1992 Constitution on appointment of MMDCEs has been approved by Cabinet, Gazetted and laid in Parliament. The year 2020 has been earmarked for the completion of all outstanding issues to pave the way for the election of MMDCEs in July 2021. Additionally, a policy frame to define the roles of MMDCEs and empower them to perform their functions would also be put in place.

The sensitisation launch, organised by the Directorate of Good Governance of Ghana Catholic Bishops’ Conference with funding from the Konrad Adenauer Stiftung, was attended by representatives from all the 20 Dioceses in Ghana who were trained to sensitise the faithful in all the Dioceses.

The sensitisation programme to be undertaken in all the Dioceses in Ghana sought to promote effective representation and accountable local governance and in particular, the direct participation of political parties in local government elections and the election by the people of their MMDCEs instead of appointment by the President.

Archbishop Kwofie assured that “in the months of October and November, the Catholic Church in Ghana in collaboration with the National Commission for Civic Education, Electoral Commission, the Christian Council of Ghana, the Ghana Pentecostal and Charismatic Council, the Muslim Community, Civil Society Organisations and Traditional Authorities, “will intensify the sensitisation of the people on the referendum in all cities, towns and villages in Ghana since the government and its institutions alone cannot do it.”

He said the District Chief Executive plays a critical role in the local governance structure of the country and when successful at the constitutional amendment, the election of the MMDCEs would mark a turning point in local governance and development in the country.

He was worried that “even though the referendum was expected to take place on December 17, little was heard of it in the public discourse. There are not the usual commentaries and debates that go with elections and politics as we have experience in recent time.”

“We the Catholic Bishops are following with keen interest the debate on the bill before parliament to amend article 243(1) leading to the election of MMDCEs and we are not happy with the trend so far.”

“It is our hope that both parties (New Patriotic Party and National Democratic Congress) in parliament will build a consensus to pass the bill by obtaining the 2/3 votes. This is what the Church and in fact our brother Muslims are expecting from you on behalf of the Ghanaian people. We shall also do our part on the referendum for the political parties participation in local governance,” the Archbishop stated.

“The Ghana Catholic Bishops’ Conference finds it rather worrying that such an important national exercise does not receive the level of participation in the discussions leading it despite the fact that, if successful, will lead to the amendment of an important entrenched article of the national constitution which calls for at least 40% participation and 75% Yes votes by the electorates.”

The New Patriotic Party Government in its campaign prior to the elections of 2016, proposed direct election of the MMDCEs on the basis of political party representation rather than appointment by the President. This is expected not only to deepen democracy at the local level, but also make the MMDCEs more accountable to the people of the District.

Archbishop Kwofie said the Ghanaian Bishops have made their voice loudly heard on many occasions borne out of “our commitment to social Doctrine of the church. “This Doctrine, based on Sacred Scriptures, has always valued the principles of democracy,” he added.

He stated that “We are convinced that that a democratic government not only ensures the participation of the citizenry in making political choices, but also guarantees to the governed, the right of electing and holding accountable those who govern them.”

Fr. Clement Adjei, the Director of the Directorate of Governance Justice and Peace at the National Catholic Secretariat in an interview with this Writer said the District Chief Executive plays a critical role in the local governance structure of the country and when successful at the constitutional amendment, the election of the MMDCEs would mark a turning point in local governance and development in the country.

He said that the constitutional amendment, “if effected would improve decentralization and participatory processes, ensure transparency and public accountability in the local governance system to enhance the Country’s democracy.”

The Deputy Minister of Local Government and Rural Development, Collins Ntim, explained that having sensitised Ghanaians and other stakeholders across the country, what will be left are the fundamental legislation to be reviewed to pave way for other consequential amendments of Article 243(1) on the appointment of MMDCEs and 55(3) which prevents political parties in Ghana from participating in local governance.

He entreated Ghanaians especially the Media, Traditional Authorities, Political parties and faith Based-Organisations to “support the process by sensitizing and encouraging their members and subjects to come out massively to vote in favour of the amendment bill during the December 17 Referendum.”

Richard Forghor from the Damongo Diocese, who was a participant in an interview with this Writer at the sidelines of the launch said that: “I consider todays Diocesan launch as part of our efforts to keep the momentum in the campaign towards getting people to come out in their large numbers to vote in the upcoming referendum and to participate in the District level elections.”

“Many people are unaware of the upcoming referendum which is less than three months away hence a lot of education is needed. But we shall do our best to get the message across using our Church structures with the support of our Parish Coordinators,” he said.

Patrick Appiah Sam from the Cape Coast Archdiocese also said that there was “the need for MMDCEs to be elected on a partisan basis, saying that would empower the electorate to hold them accountable for their stewardship.”

“This is the simple message we are taking home to our people through our Parish Coordinators who will use our parishes and outstations as vehicles to get this message across,” he added. 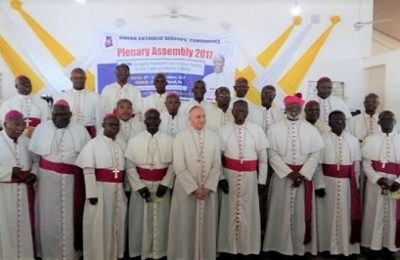 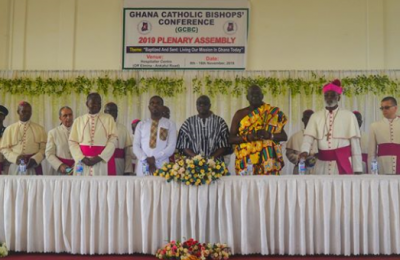