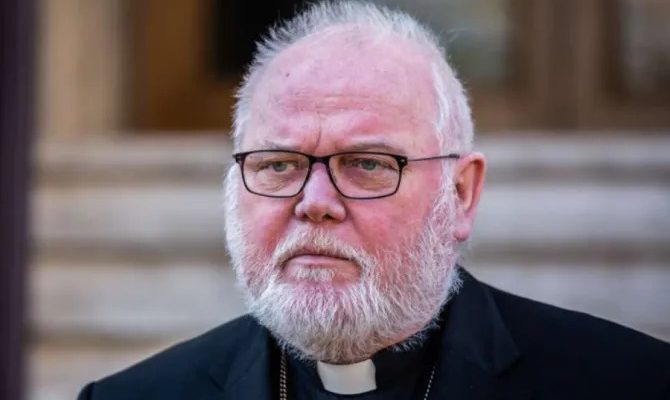 Cardinal Reinhard Marx, the 67-year-old archbishop of Munich and Freising, has offered his resignation to Pope Francis.

The influential cardinal is a member of the pope’s Council of Cardinals, the coordinator of the Vatican Council for the Economy, and until last year the chairman of the German bishops’ conference.

The archdiocese of Munich and Freising published the cardinal’s letter to the pope and personal declaration on June 4 in German, English, and Italian.

In his May 21 letter to the pope, Marx outlined his reasons for seeking to resign from office.

He wrote: “Without doubt, these are times of crisis for the Church in Germany. There are, of course, many reasons for this situation — also beyond Germany in the whole world — and I believe it is not necessary to state them in detail here.”

“However, this crisis has also been caused by our own failure, by our own guilt. This has become clearer and clearer to me looking at the Catholic Church as a whole, not only today but also in the past decades.”

“My impression is that we are at a ‘dead end’ which, and this is my paschal hope, also has the potential of becoming a ‘turning point.’”

He continued: “In essence, it is important to me to share the responsibility for the catastrophe of the sexual abuse by Church officials over the past decades.”

The pope informed the cardinal that his letter could now be published and that he should continue his episcopal service until a final decision on his resignation is taken, reported CNA Deutsch, CNA’s German-language news partner.

In the letter, Marx said that the investigations and reports of abuse over the past 10 years consistently showed for him that there had been “many personal failures and administrative mistakes but also institutional or ‘systemic’ failure.”

“The recent debates have shown that some members of the Church refuse to believe that there is a shared responsibility in this respect and that the Church as an institution is hence also to be blamed for what has happened and therefore disapprove of discussing reforms and renewal in the context of the sexual abuse crisis,” he said.

“I firmly have a different opinion. Both aspects have to be considered: mistakes for which you are personally responsible and the institutional failure which requires changes and a reform of the Church.”

He continued: “A turning point out of this crisis is, in my opinion, only possible if we take a ‘synodal path,’ a path which actually enables a ‘discernment of spirits’ as you have repeatedly emphasized and reiterated in your letter to the Church in Germany.”

Marx, who has served as archbishop of Munich and Freising since 2007, said that he hoped his resignation would “send a personal signal for a new beginning, for a new awakening of the Church, not only in Germany.”

“I would like to show that not the ministry is in the foreground but the mission of the Gospel. This too is an element of pastoral care. I therefore strongly request you to accept this resignation.”

In April, Marx asked German President Frank-Walter Steinmeier not to bestow the Federal Cross of Merit on him after an outcry among advocates for abuse survivors over the award.

He had been scheduled to receive the Bundesverdienstkreuz, Germany’s only federal decoration, at the Bellevue Palace in Berlin on April 30.

Marx said that he did not want to draw negative attention to other award recipients.

In February 2020, he notified German bishops that he would not stand to be elected to a second term as chairman of the German bishops’ conference. He was succeeded in the post by Bishop Georg Bätzing of Limburg.

Marx is the second German bishop in recent months to tender his resignation to the pope.

Archbishop Stefan Heße of Hamburg announced that he had taken the step in March, saying: “I have never participated in any cover-up. Nevertheless, I am willing to bear my share of responsibility for the failure of the system.”

Earlier this week, it emerged that Pope Francis has ordered an apostolic visitation of the troubled Cologne archdiocese amid fierce criticism of its handling of abuse cases.

Cardinal Rainer Maria Woelki of Cologne announced in December 2020 that he had asked the pope to review the decisions he took regarding an accused priest — identified only as “Pastor O.” — in 2015.

In his personal declaration, Marx said that he had repeatedly thought about resigning from office over the past few months.

“The events and debates of the past weeks, however, only play a subordinate role in this context,” he said, explaining that his request to resign was an “exclusively personal decision.”

He wrote: “With my resignation, I would like to make clear that I am willing to personally bear responsibility not only for any mistakes I might have made but for the Church as an institution which I have helped to shape and mold over the past decades. Recently, it has been said: ‘Coming to terms with the past must hurt.’”

“This decision is not easy for me. I like being a priest and bishop and hope that I can continue to work for the Church in the future. My service for this Church and the people does not end.”

“However, to support a new beginning which is necessary, I would like to bear my share in the responsibility for past events. I believe that the ‘dead end’ we are facing at the moment can become a ‘turning point.’ This is my paschal hope and I will continue praying and working for it to happen.”