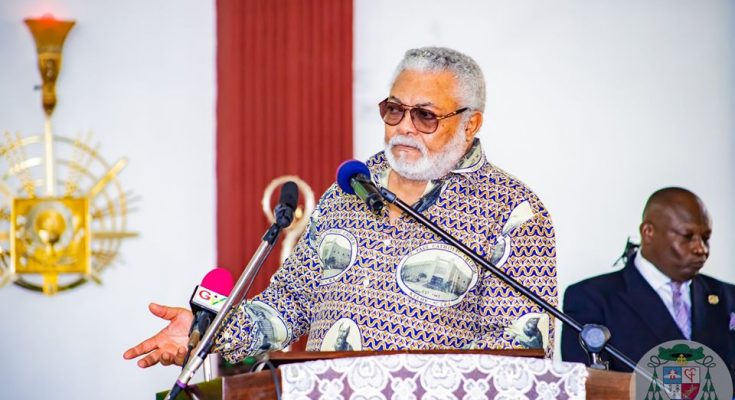 Be prepared to die for your faith, Justice – Ex President Rawlings tells Catholics

Guest of Honour at the climax of the 75th Anniversary celebration of the St Paul Catholic Church, Kpehe Former President of the Republic of Ghana, His excellency Jerry John Rawlings has challenged Catholics to be prepared to die for freedom, Justice and their faith.

He noted that being Catholic is no joke and Catholics must stand proud in their faith defending what is good for the country.

He, however, noted that Ghanaians, particularly politicians have a lot to learn from traditional leaders because they are an embodiment of truth.

“Those people do not lie, they are not corrupt and they stand for nothing but truth” and that’s exactly what we need today in our country for Ghana to be a better place. The prayer of thoughts and words must be accompanied by the prayer of actions and there is the need to start making the difference in society with what we have and where we are and not wait to get greater heights to start making the difference.

”There should be the courage of conviction to stand by what we believe in and that is what will make us good Catholics and Ghanaian,” he said.

The former Head of State said Christians ought to take appropriate actions through courage to preserve human dignity at all times.

“You should be prepared to die for freedom, justice, your belief and you should be fearless like Christ to stand up for the truth. We need the courage of conviction to live by the truth,” he said

Citing an example with the Holy Father Pope Francis, he said the Pope went a step further from using prayer of words to taking an action by kissing the feet of two contenders of political power in South Sudan and imploring them to maintain the tenuous peace that existed between them.

“I’m asking you with my heart,” the Pope said to the President, Salva Kiir, and the opposition leader, Riek Machar, clutching his hands in front of his chest. “Stay in peace,” he quoted the Pope.