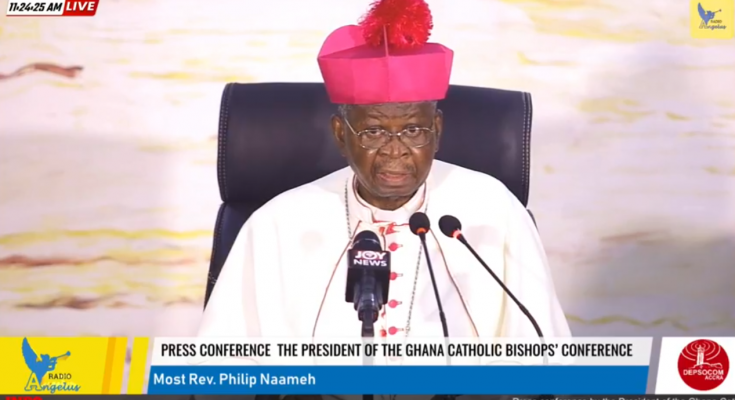 The President of the Ghana Catholic Bishops’ Conference (GCBC), Most Rev. Phillip Naameh has dispelled a publication the CNN attributed to him.
In the said publication, it was alleged that the President of GCBC said “Ghana risks becoming Muslim-majority country if LGBTQIA+ is allowed.” This was subsequently published by some media outlets including, MyNewsGH and GhanaWeb.

The Archbishop in a press conference today, Monday, October 11, 2021, stated categorically that the statement attributed to him is false and does not reflect the actual content of the conversation, which has to do with the Catholic Church’s support for the bill. He further said the position of the Catholic Church on the LGBTQIA+ has been made known in several interviews he has granted media houses like JoyNews and Citi FM on the issue. He said the LGBTQIA+ was against not only Christian values but Muslim and Traditional values as well.

He also touted his peaceful nature and has at all times promoted peace with Christians and Muslims. “It is also important to add that for the past 44 years that I have been a Priest, I have always promoted peaceful coexistence, religious tolerance, and harmony amongst all people” stated the Metropolitan Archbishop of Tamale.

The archbishop also said that this publication was a step to cause disaffection for him and break the front. “I have the feeling that they only sought to cause disaffection for me and break the front of the formidable Coalition behind the Proper Human Sexual Rights and Family Values Bill.”
He, therefore, called on all peace-loving Ghanaians and all people of goodwill to disregard with contempt the fabrications and distortions that are calculated to distract the collective quest of all to make sure the bill is passed.

Below is the official press statement.