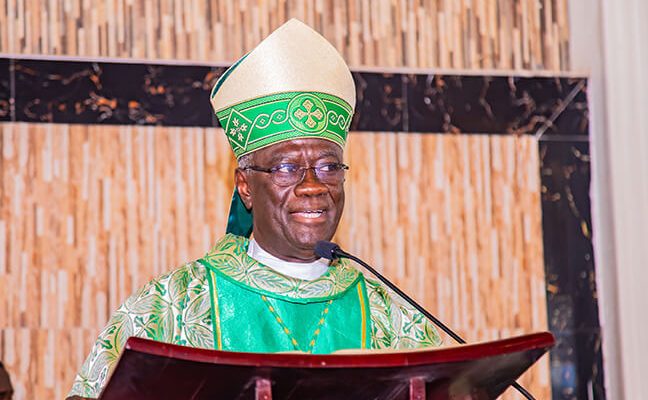 The Metropolitan Archbishop of Accra and Episcopal Bishop in charge of education, Most Rev John Bonaventure Kwofie CSSp clocks five years today, September 13 2019 in his Episcopal ministry as a bishop.
He was ordained By His Eminence Cardinal Peter Kodwo Appiah Turkson, Prefect, Dicastery for Promoting Integral Human Development, as the fourth Bishop of the Sekondi-Takoradi diocese on September 13 2014 as he succeeded the late Most Rev. John Martin Darko.

Most Rev John Bonaventure Kwofie was born to the late Mr. John Kogyan Kwoﬁe and Madam Agnes Ama Tokwah Kwoﬁe on April 26 1958.
Archbishop Kwofie is the ﬁrst of ten sibling and hails from Apowa in the Ahanta West District of the Western Region. He was ordained a priest on July 23,1988 after his priestly training.
He served in the capacity of the Vice Chairman of the Conference of Major Superiors of Men from 1995 to 1998, and served as its President for two terms from 1998 to 2004.
He was elected Co-ordinator of the Continental Conference of Major Religious Superiors in Africa from 2003 to 2005.
He served as assistant priest and lecturer at the Pontifical Bible Institute in Rome .
When he completed his term on the General Council of the Spiritans in Rome in 2012, he took a sabbatical year at Fribourg University in Switzerland. He then became a lecturer at the Theology Department of Duquesne University, Pittsburgh, in July 2013 and was appointed Bishop of Sekondi-Takoradi on July 3, 2014. He returned to Ghana and was ordained as the fourth Bishop of the Catholic Diocese of Sekondi-Takoradi, on September 13, 2014.
On January 2, 2019, he was appointed the Archbishop of the Catholic Archdiocese of Accra.