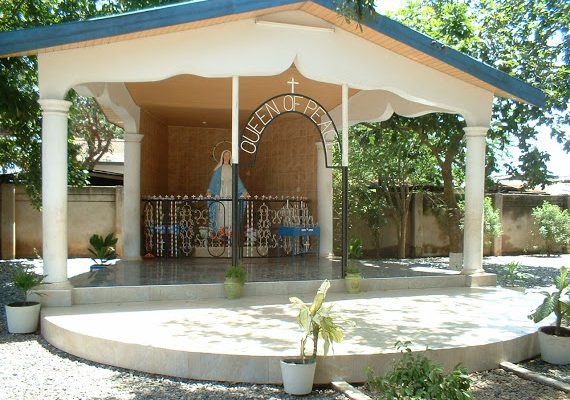 The Our Lady Queen of Peace Catholic Church in the Archdiocese of Accra marked its feast day on Sunday, 25th August 2019. The Celebration was held under the title the Queenship Celebrations of Mary. The celebration was led by two Priests of the Parish, Rev Father Owusu Ansah (PP) SMA, and Fr Wilmer Cacao, SMA. They were assisted by a former Parish Priest, Rev. Fr. Daniel Louh SMA and other priests.

The Queenship Celebration is one of the flagship activities of the Parish which honours the Blessed Virgin Mary. The Queenship follows logically the Doctrine of the Assumption of Mary into heaven. Having assumed into heaven, Mary was crowned Queen of Heaven and Earth. She is therefore being honoured with the title of Our Lady Queen of Peace.

In the Homily, Fr Wilmer Cacao SMA, urged Christians and for that matter Catholics to emulate Mary’s lively Faith. Fr. Wilmer stressed that, Mary was ordinary. But in her ordinariness, she had inner beauty. She had inner beauty of faith and obedience to God. She dared to say yes to God, even though she did not understand what it fully entailed. Therefore, the priest said that in an era where role models were in short supply, we could look up to Mary as our role Model. ” Every faith must be active and alive not talk. It must be lived out”.

He further indicated in his homily that the road to heaven is narrow. Hence the Lord is asking us to present our ordinary ways and means to serve each other with a sincere heart and that God could take those ordinary things and transform them into extra ordinary things.

The celebrations brought Parishioners from the different outstations in together. The over 1000 seating -capacity church was full, with many sitting outside under pre-arranged canopies. Characteristic of the parish’s diversity there was representation from almost every tribe and ethnic group in Ghana in the church service. This diversity was demonstrated both in the singing and dressing.

In attendance also was a former Parish Priest, Fr Daniel Louh SMA. His presence was electrifying as parishioners remembered with joy his time as a Parish Priest.

Among the many things that took place during the celebration was the enthronement of Mary. A statue of Mary was enthroned amidst singing and dancing led by the St Paul Dagaaba group. The enthronement ceremony was led by Mr Nicholas Avagah, one of the staunch and active men in the Parish.

Also, as part of the celebration an update was given on plans that were in place to give the Queen of Peace Church building a facelift. To this end, Mrs Lucy Afari, convener of the Church’s face lift project gave the updates. She indicated that an Architect and an engineer were engaged to provide some technical support to the project. Architectural drawings and engineering works were carried to give the scope of work that would be involved.

To this end, the scope of work in the facelift included removal of the honeycombs design and to be replaced with cathedral glasses. Other changes to be made were repainting of the entire building. And finally, the floors and landscaping were to be carried out. The entire project is estimated to cost 1.5million Ghana Cedis. So far, the Church has raised nine-thousand Ghana Cedis.

Families, individual and groups were encouraged to contribute to the facelift as a way to give glory to God and for their own edification. The project is expected to last for 5 months from start to end, when funds are secured.

Donations were made by different groups and persons to the Church. One of such groups that made a donation was the youth wing of the Sacred Heart Navrongo Bolgatanga Diocese (NABOD) group in the parish. They made the donation as part of their 10th anniversary celebrations. Clad in their uniform they presented to the Church10 metalic bins and refuse collection containers. The presentation was to support the Parish Sanitation campaign. The Queen of Peace Parish, Madina, as part of their contribution to keeping the Capital City clean, recently launched a Sanitation Campaign dubbed “If You Drop it, Pick it”.

The NABOD Youth therefore donated the bins to aid the Churches campaign of keeping its compound clean as well as being examples to the entire Madina Community. Meanwhile, Simon Okyere, a prominent lawyer of the Parish who marked his 40-anniversary birthday celebration with a thanksgiving in the parish also presented a new organ to the Parish. He said the organ should be used for the church’s activities and for propagating the gospel. He also pledged to support the face lift.

There was a second part of the celebration called an Agape. It was a time of sharing. Parishioners brought different kinds of food which they had prepared from their homes to share with each other. There were different kinds of dishes as there were different tribes and ethnic groups. There was Fufu, Tz, Tumpaane, Rice, etc. Interacting with one of the parishioners who was eating T.Z with “dzor-dzor”, a locally prepared dish by the Dagaaba, he joked that “a petition should be sent to the Pope to include this dish as one of the sacraments. I think this meal should be made the 8th sacrament. Its so good. look it can cure all forms of malnutrition.

So I think it should be made the 8th sacrament. So that after every mass we can have T.Z with dzordzor before we go home.” Apart from the meals, different kinds of drinks were served. Everyone had their fill. There was also cultural display by the different groups in the parish including the Bawaa, borborbor, etc. People ate, drunk and danced to the joy of the Lord. Indeed, the agape celebration could be likened to the presence of Mary at the wedding at Cana, there was much for everybody.

Earlier before the final blessings of the mass celebrations, the Parish Priest, Fr Charles Owusu Ansah SMA, congratulated all parishioners on the occasion of the Queenship celebration. He encouraged all to continue to support the Parish. He also urged parishioners to continue to invest in the Queen of Peace Credit Union. He indicated that the Credit Union was solid, and that parishioners should not do panic withdrawals as a result of the recent financial crises that many financial institutions were going through in the country.

He condemned the greediness of a few in the financial system that were causing trouble to many. He also called on those who defaulted in their loan repayment with the credit Union to do so speedily to avoid embarrassment. The Queenship Celebrations is celebrated annually since the inception of the parish. It’s always an opportunity for networking, fellowship and sharing.