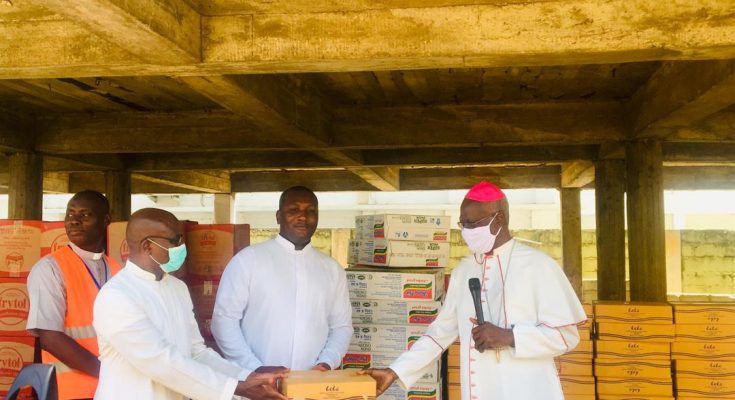 A delegation led by the Most Rev John Bonaventure Kwofie, Metropolitan Archbishop of Accra on Sunday April 12, 2020 presented hosts of items to be distributed to ten (10) selected Parishes within the Archdiocese.

Archbishop Kwofie, presenting the items noted that, the items would be distributed beyond the Catholic lens; the exercise is aimed at reaching out to the needy during the restrictive period spelt by the government.
“We want to reach the vulnerable, people of need in the ten(10) Parishes that have been identified. We’re going to reach other Parishes, but then, it doesn’t matter whether they’re Catholics or not, what matters is that they’re in those places and through Caritas and the Parish Priests we can reach them”, he stated.

He further thanked the IHM under the tutelage of Mr Don P. Magnotta for supporting the course and placed a further call on other stakeholders to reach out to the vulnerable during the restrictive period.

Rev Father Cletus M. K. Forson, Priest in charge of Holy Rosary Catholic Church and representative of IHM Incorporated, USA in his response noted that his outfit intends to make further donations to “families hurting during this pandemic”.
He also charged Caritas Ghana to “take care of the donations” to be able to attract additional support. 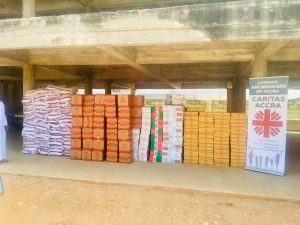