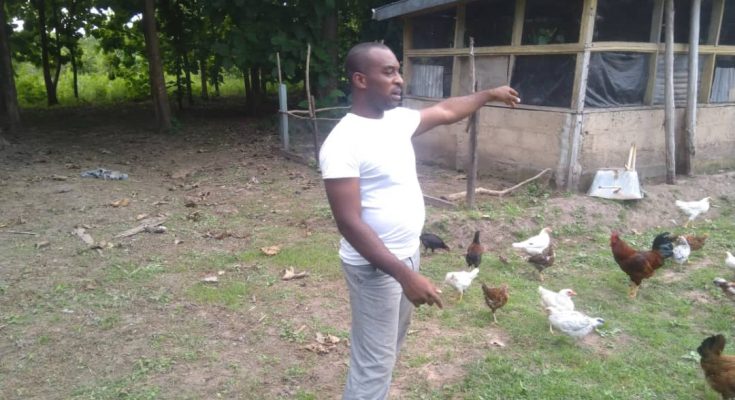 Rev. Fr. Philippe M’boua SMa, a missionary of the Society of African Missions (SMA) from Ivory Coast, has called on the youth in the Catholic Church to embrace Agriculture as a source of livelihood. He made the call at his base at the OKU RECTORATE of the Our Lady of Assumption in the Konongo-Mampong Diocese of the Ashanti Region of Ghana.

He indicated that though there are challenges, the sector holds the key to unlocking the economic potential of the African continent. As a Catholic priest who is also engaged in Agriculture to support the ministry, he indicated that a challenge he facing practicing agriculture alongside his pastoral work is how the members of the Oku community do not understand why a priest should be engaged in farming. They find him to be too high to be engaged in farming. He also mentioned difficulties in getting labour as everyone is busy on their own farms. He further indicated that in instances where labour is available there is the challenge in getting funds to pay for their services. Despite these challenges, he finds Agriculture as a lucrative business and therefore urged the youth to embrace it as a source of livelihood.

He called for a change of mind-sets of people with regard to those venturing in Agriculture. It would mean that people be educated on the importance of Agriculture as a source of livelihood.

“I believe that Agriculture is the way to end poverty in Africa” he stressed. The priest who is currently engaged in keeping poultry as well as a maize farm said “I have a passion for agriculture, so apart from pastoral I do it to support the work”

Whilst commending the government of Ghana for their support for Agriculture, he called for increased support to small holder farmers. Particularly in this period of the COVID-19 pandemic, there was the need for the Government to intervene by buying excess produce from the farmers due to the border restrictions. He feared farmers might not be able to get money to plant for this season.

Father M’boua made call during a working visit that was paid to him by Fr. Dennis Senyo ETTI SMA, the Vice Provincial Superior of the SMA Ghana Province.

Fr. Dennis Senyo ETTI SMA on his part indicated that the SMA in Ghana apart from their core responsibility of preaching the gospel also found it important to contribute to improving the livelihoods of the communities they work in. With respect to Agriculture they were working to provide extension advice as well as credit facilities to help farmers ramp up their production.

Fr. Dennis Senyo ETTI SMA was accompanied by Fr. Tranquillin Junior BIRO-MOEBA, SMA as the Councillor and together with Mr.Raphael Amponsah, an officer with the SMA Development office in Accra.

The Oku rectorate is situated in the Ashanti region in the Konongo-Manpong Diocese. It is a remote village dominated by people who are mostly farmers. As a remote community, it has its own challenges among which are the lack of electricity, poor road, and inadequate water supply among others.

Share this
Previous PostSeminar Held On The Naming Of Books Of The Old Testament In Dagaare Next PostSaint of the day: St. Dominic, Patron of Astronomers