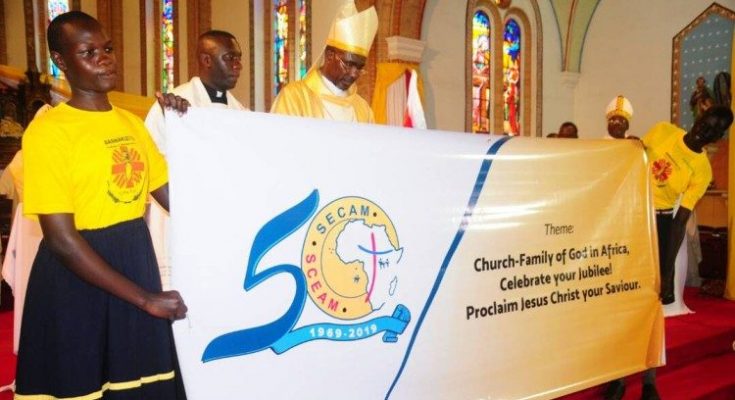 The 18th Plenary Assembly and Golden Jubilee of the Symposium of Episcopal Conferences of Africa and Madagascar (SECAM) is underway in Kampala, Uganda. The assembly which opened on July 21, expected to end on July 27, is on the theme, “Church-Family of God in Africa, Celebrate Your Jubilee! Proclaim Jesus Christ Your Saviour.”

The event is hosting about 300 participants, including representatives from the Vatican, Cardinals, Archbishops and bishops, priests representatives of Religious congregations, the lay faithful and other dignitaries from the length and breadth of the World, Africa and the surrounding islands who will deliberate on how far the church has come and what the way forward should be for the next fifty years.

The deliberations are also expected to lead to the finalization of the “Kampala Document”.  A pastoral document which will review the journey of SECAM over the past fifty years and will give direction on where the Church in Africa should be in the next fifty years, in terms of pastoral priorities.

Speaking at the opening Mass on Sunday July 21,  Archbishop of Cape Coast, Ghana, Most Rev. Gabriel Charles Palmer-Buckle said the Church in Africa has every reason to celebrate because she can now boast of native cardinals, archbishops, bishops, priests and Religious men and women ministering in Africa and the universal Church.

“From barely fifty bishops, archbishops and cardinals who were present at the inauguration of SECAM here in Kampala, today Africa has over 500 bishops and archbishops, and as many as 25 cardinals ministering to the Church on our continent and in the universal Church. From a population of about 40 million Catholics fifty years ago, we have every reason to celebrate a population of over 178 million on the continent, making about 17% of the Universal Church,” he said.

The Archbishop noted that the Church in Africa is the fastest growing in the world and also the most vibrant in her liturgical celebrations and her witnessing to the faith in Christ Jesus.

During the Plenary meeting, SECAM Members will also review their performance with regards to the mission entrusted to the Church in Africa and chart way forward to ensure that leaders of the Church in Africa take up their mission of evangelization with greater zeal and focus.

SECAM was born as a wish of African Bishops attending the Second Vatican Council (1962-1965), to establish a forum in which they could speak with one voice on matters pertaining to the Church in Africa.

The idea was concretised in July 1969, during the visit of Pope Paul VI to Kampala (Uganda); being the first time a Pope was visiting sub-Saharan Africa, the African Bishops saw it as an opportune occasion to launch the Symposium of Episcopal Conferences of Africa and Madagascar.

Fifty years later, on 29th of July 2018, SECAM launched the SECAM Golden Jubilee Year on the theme, Church-family of God in Africa, Celebrate your Jubilee! Proclaim Jesus Christ your Saviour. It was a deliberate decision to have a year of prayerful preparation towards the Golden Jubilee in July 2019.